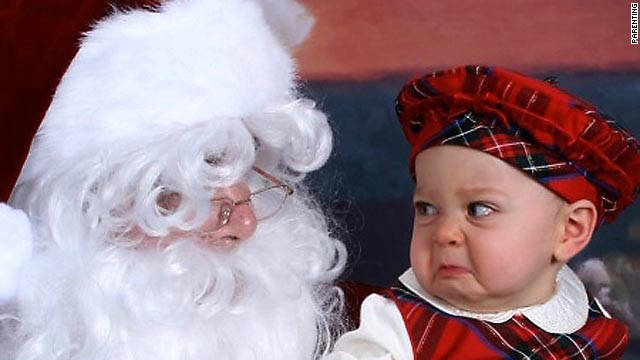 Some are taking a second look at the Santa Claus story after some recent controversies.
December 17th, 2013
04:57 AM ET

5 Things to Know for Your New Day – Tuesday, December 17

A judge slams the NSA, today's a big day for the Washington budget deal, and Santa's caught in a growing mess.

Judgment day: Some have had choice words for the National Security Agency’s surveillance measures. Yesterday, a federal judge added another word to describe the NSA's spying: Unconstitutional. The government’s collection of metadata, which includes phone records of the time and numbers called, violates privacy rights, a judge said. The ruling may be cheered by some, but it is limited. U.S. District Judge Richard Leon’s ruling applies only to five plaintiffs that had sued the NSA. The decision will also be challenged. The Justice Department said it disagrees with the judge and there will be an appeal. But one person probably cheering this decision is Edward Snowden, the man who leaked the classified documents that exposed this issue.

When asked what they thought of the scathing report today by a federal judge the NSA said, "We saw it 6 months ago."

This comes as President Obama has ordered a review of NSA practices. He is scheduled to meet with a group of
tech company executives to discuss the issue today.

Jim Sciutto will be live to give us the latest on this story. And Jeffrey Toobin will provide analysis.

Close to a vote? Senate supporters of the pending budget deal say they are close. The optimism comes after several conservative Republicans said yesterday they would support the deal. Now, senators say, they should have enough votes to break a filibuster today. Once that happens, the budget could pass later this week. The deal, which has already passed the House, will change the way Washington has worked recently. And it will avoid another government shutdown.

The Ryan-Murray budget deal falls far short of addressing the nation’s fiscal challenges. I intend to vote against it http://t.co/bf0StOuMBb

Jim Acosta will give us the latest on this story.

Soap opera: Are all those new fancy hand soaps and body washes that have been popping up better than regular soap? Makers of those products will now have to prove it, the Food and Drug Administration says. Manufacturers of some antibacterial soaps will now have to prove their products are safe for long-term use. Some products can cause “health risks, such as bacterial resistance or hormonal effects," the FDA says. Listen to this FDA statement: “Although consumers generally view these products as effective tools to help prevent the spread of germs, there is currently no evidence that they are any more effective at preventing illness than washing with plain soap and water.” But you won’t have to throw out that blueberry, mango body wash any time soon. It will take more than a year, the FDA says, before the rule will kick in.

"There really isn't enough evidence to show there is benefit over soap and water" @drsanjaygupta on #antibacterialsoap. #AC360

This reinforces why I use old fashioned soap and water (and not "antibacterial" soap): http://t.co/iNTgcjLARe

Elizabeth Cohen will update us on this story.

Sign that ticket: That’s one of the tips some are offering to the winner of today’s Mega Millions mega jackpot. The lottery is living up to its name as the jackpot has ballooned to an obscene $586 million. Why sign the ticket? Are you crazy? What if the roommate "claims" it? What if your significant other isn't as significant as you thought? What if you are showing it to someone, say over a beer or 10, and it goes missing? Sign it - if you didn't when you bought it - because whoever has an unsigned ticket when it gets turned in can call dibs on it. Other tips include: Get some advice from past winners, and get a lawyer and figure out if you want to stay anonymous. All these tips will help you avoid problems. But really, how many problems could the winner of today’s Mega Millions really have? Try this: If nobody wins, the jackpot could jump to $1 billion. Now that’s problems.

It's that time again, where I stop studying for finals and start planning what i'll do when i win #MegaMillions #buyabugatti @carledge113

Yall gon be mad when i win this mega millions tomorrow.. who imma share some of the money with? lol

Pamela Brown will update us on this story.

Ho, ho, woes: Good ole St. Nick may not be used to being wrapped up in controversy. But in recent days, Santa has caused some issues. There’s an African-American high school student in New Mexico who says he was questioned by a teacher for wearing a Santa outfit. You can't be Santa - you're black, the boy’s father said the teacher told him. The boy was crushed and embarrassed, the father told CNN affiliate KOAT. Now the ninth-grader wants nothing to do with Christmas, the father says. The school system weighed in. "This situation involves a teacher recently hired by Cleveland High who made - and admits he made - a stupid mistake," the school system said. "The remark was inappropriate. … ”

Not sure if I'm comfortable with the thought of Santa Claus judging me all year.

The teacher's remark came amid something of a dust-up over Santa's skin color after Fox News Channel picked up on a Slate.com writer's piece questioning the mythical character's ethnicity. Fox anchor Megyn Kelly responded to the piece by saying: "And, by the way, for all of you kids watching at home, Santa just is white, but this person is arguing maybe we should also have a black Santa. But, you know, Santa is what he is. And so, you know, we're just debating this because someone wrote about it, kids." Whoa. This is getting deep. But despite the hurt feelings involving Kris Kringle, we may be able to agree on one thing. Spoiler alert: (Kids, please look away for a second) Santa is not even real.

Photo: My exclusive interview with the real Santa coming up right now on #CNN. What color will he be? Hmm... http://t.co/vLUJQTP3fZ

Tune in for news headlines to hear about this story and others.

- Funky Santa: Despite the controversy, this Santa knows how to spread the holiday cheer.

- Cheer dad: This smooth-dancing dad shows his daughter another example of holiday cheer.

- Crazy cat: This cat is not in the holiday mood.

- Poor Waffles: Waffles, the cat, is having a bad day. But at least you always land on your feet. Right, Waffles? Waffles?

- Amazing catch: This dad seems to have forgotten that his baby is on the luggage counter. Luckily, this security guard was watching.