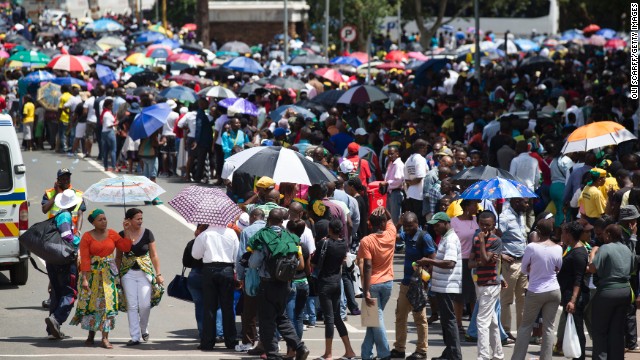 Crowds wait to say goodbye to Nelson Mandela as he lies in state in Pretoria for the last day.
December 13th, 2013
05:18 AM ET

5 Things to Know for Your New Day – Friday, December 13

A Montana woman admits she shoved her husband down a cliff, Nelson Mandela lies in state for a final day, and North Korea executes the leader's uncle.

1. PHONES ON PLANES
Text but not call?: The federal communications agency made the call to allow cellphones during flights. But the Department of Transportation says hold on. The DOT does not want flights filled with yakking passengers, and says it's looking into the possibility of eliminating voice communications.  Some say  cell phone conversations are annoying in close confines of a plane, and have cast it as a consumer rights issue. The  Federal Communications Commission voted 3-2 yesterday to consider lifting its ban. But Secretary of Transportation Anthony Foxx says his department will decide whether allowing calls is fair to consumers.

A new world wide Plague, Cellphones on Planes.Can you imagine listening to some idiot calling for Pizza when he lands

Rene Marsh will be live with details all morning.

2. MONTANA  KILLING
Husband pushed off cliff: In a drastic twist, newlywed Jordan Linn Graham is admitting she shoved her husband down a cliff. Graham pleaded guilty to second-degree murder yesterday as part of a plea deal. She says she pushed  her husband during an argument in July.  "It was a reckless act," she says of the incident at Glacier National Park in Montana. "I just pushed."  She was married to Cody Johnson for eight days.

Kyung Lah will have the latest all morning.

3. MANDELA FUNERAL
Goodbye to an icon: The former South African president  lies in state in Pretoria for a final day today. Lines snaked around downtown as throngs waited to say their goodbyes. Mandela's last public viewing is at the same place he was inaugurated as the nation's first black president. His body will then be transported to his boyhood home of Qunu for the burial Sunday.

Sad day today as the public has the last chance to bid Madiba farewell. #NelsonMandela

The political cartoon in London's The Times paying tribute to Nelson Mandela pic.twitter.com/0MX1J1VHTp

Arwa Damon will have more details at 6.

4. NORTH KOREA
No. 2 executed: North Korea says it has executed the "traitor" uncle of leader Kim Jong Un.  Jang Song Thaek was considered the second most powerful man in the secretive regime. State media described him as a  "despicable human scum" and "worse than a dog. It accused him of betraying his party and leader. Jang was married to Kim's aunt and served as vice chairman of North Korea's top military body. He was often pictured beside his 30-year-old nephew.

Just how crazy can North Korea get? Kim Jong-Un has executed his own uncle

Jim Sciutto will be live with details all morning.

5. BUDGET COMPROMISE
House approves: No more government shutdown. Well, at least not for two more years. A compromise federal budget plan won easy approval yesterday in the House.  It now goes to the Senate, where it is expected to pass next week. Its passage is a feat on its own. It represents a rare convergence between the two parties on government spending after two years of bitter debate. Their political brinkmanship included the 16-day shutdown in October. But military employees are not applauding the deal.  It cuts their benefits.

Athena Jones will break it down for us all morning.

#blockrestored: Twitter makes a change that allows trolls to interact with those who’ve blocked them. Backlash ensues on  –where else – Twitter. The social media giant listens. The block is restored.

Ponies stand for #restoretheblock Don't be a pony hater. pic.twitter.com/oMLjR5vYZU

Dear @twitter thanks for listening to #RestoreTheBlock. I didn't wanna have to re-block my gf's exes while she showered...but I totes woulda

Need an uninterrupted nap? #Relaxed will send auto replies to friends who are trying to hit you up during quiet time. http://t.co/6DJHw2tdoY

Taking another lap: For decades, these two brothers sat for a picture with Santa every year.  Their evolution came full circle this year when their kids joined them on Santa’s lap.

Unique escape:  These over-the-top makeovers give cancer patients something to smile about, if only for a second.  The popular program gives cancer patients makeovers with their eyes closed. The priceless moment comes when they open their eyes expecting glamorous looks. Instead, they are surprised with a hilarious new do.

And in the spirit of fun videos, join us this morning for our countdown!

We all LOVE a good #viral video, right? We're counting down @YouTube's top 5 this am with their very own Kevin Allocca. Did you have a fave?

Leave a Reply to Tiffany Hicks