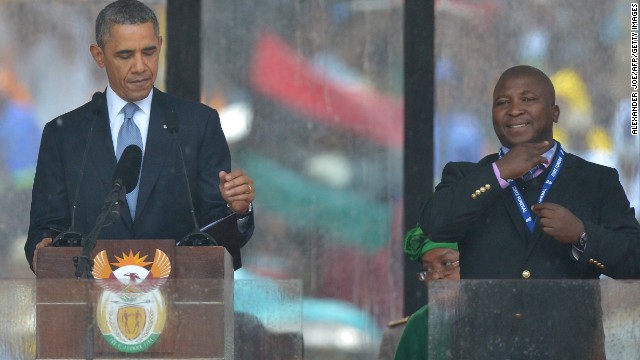 The sign language interpreter during Nelson Mandela’s memorial was seen by millions worldwide. But no one understood him.
December 12th, 2013
05:23 AM ET

5 Things to Know for Your New Day – Thursday, December 12

A  6-year-old boy is suspended for kissing a girl, a sign language interpreter is criticized for his work and the Senate pulls an all-nighter.

Say what? In this case, the pictures weren't worth a single word. The sign language interpreter signed vigorously throughout Nelson Mandela’s memorial. He was seen by millions worldwide, but apparently understood by no one. He had a sign language of his own. “I wanted to go to the FNB stadium and grab that man from the stage,” says Abram Maripane, a sign language trainer. The interpreter stands by his performance, though. He told CNN affiliate Radio 702 that he’s been trusted with other big events in the past. “There was no one at all that said I interpreted wrong.” He also told the station he has schizophrenia and is receiving treatment.

Pam Brown is live with the latest at 7.

I kissed a girl … : And the school really didn’t like it. It suspended the 6-year-old first-grader and said his record will show he “sexually harassed” the girl. All this for kissing a classmate on the hand! A tsunami of backlash followed, and last night, the school reversed course. It said he can return to school and changed his offense from “sexual harassment” to “misconduct.”

#BestoftheWebToday Free Hunter Yelton: Meet the littlest casualty in the war on men, by @jamestaranto http://t.co/vaaYIvjnoi

Stricken with affluenza:  To families of the victims, Ethan Couch is a killer; a teen drunk driver who killed four people. To the defense, he’s a victim of "affluenza.” Or more precisely, the product of wealthy, privileged parents who never set limits for him. A judge seemed to agree with his lawyers, saying Couch needs treatment. He sentenced the 16-year-old to 10 years’ probation and no jail time. His relatives were stunned.

@AC360 This case is disgusting. The driver should have been tried as adult and sentenced accordingly. Are the parents going to jail? #AC360

Alina Machado will break it down for us at 6.

Selfie destruction?  It sounds like the teen edition of “The Hangover.” A bunch of kids allegedly break into a swanky LA pad last month and throw a bash.  They trash the home and bag some loot, including a suit and a $250,000 stuffed leopard.  Not satisfied with the damage, cops say, they brag about it on social media. Bad move. Those selfies led cops to three 18-year-olds and 13 minors this week, who now face burglary, grand theft and trespass charges.

5. PRESIDENT'S NOMINEES
The wrangling continues: Republicans and Democrats are at it again. The Democrats are trying to get the president's nominees approved before they break for the holidays, and the Republicans are saying not so fast. The Senate burned the midnight oil to approve Cornelia Pillard to the the U.S. Court of Appeals for the District of Columbia Circuit this morning. And  that’s just the beginning, the GOP says. It says it plans to delay the list of nominees to various senior posts. Not to be outdone, Democrats say they'll be in session around the clock if that's what it takes to get nominees approved.  Next up, the House prepares to vote on the budget today. Grab your popcorn – the all-nighters may become the new norm.

Oh, Senate, you and thousands of college students are pulling an all nighter to finish your work.

Joe Johns will have the latest all morning.

Dreaming of a white Christmas?  Folks love the idea of twinkly lights, hot cocoa and snow on Christmas morning. That’s why the National Climatic Data Center created this map to show whether your dream will come true this year. (Spoiler alert: If you live in the South, fuhgeddaboudit)

I'm dreaming of a white Christmas.. But if the white runs out, I'll drink the red. #onceuponabetch

On a high note: What happens when the Soweto Gospel Choir - disguised as supermarket workers - erupts into a song for Mandela? Awesomeness and tears, that’s what.

Bringin’ it back:  When you hear David Thibault, 16, sing "Blue Christmas," you’ll think Elvis is back in the building.

Who cares about the Oxford comma? Not Sky News, that’s for sure. Its editors learned the hard way when they sent out this poorly worded alert. And with it, they became the latest social media sensation. And not in a good way.

Snow angels are so last year: British artist Simon Beck put them to shame when he walked through the snow, leaving behind visually breathtaking track prints.

Made by artist Simon Beck by walking in complex patterns while wearing snowshoes pic.twitter.com/6OBwp3NqwZ

Nice play, W:  Cade Foster’s had a rough few days. His three missed kicks cost Alabama a game on November 30.  Death threats followed.  But apparently not from George W. Bush. The kicker posted a letter bearing the former president’s letterhead on his Instagram account. Talk about No. 43s sticking together.

"Dear cade (#43), Life has its setbacks. I know! However you will be a stronger human with time. I wish you all the best- Sincerely- another 43 George Bush".. Framing this.