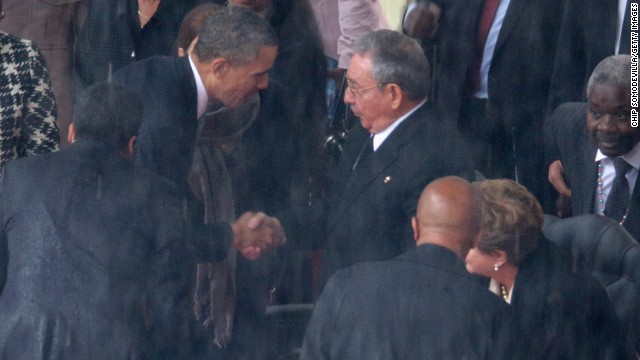 5 Things to Know for Your New Day – Wednesday, December 11

A miracle rescue, a hard-to-believe budget deal and the handshake heard around the world.

Miracle: A Christmas miracle came early, it seems. A family of six survived two days lost in the wintry Nevada mountains and were saved. Their situation was dire. They were in an overturned Jeep in temperatures of about 20 degrees below zero. How did they survive? The industrious family says they started fires and warmed rocks to help fight against frostbite. When they were found yesterday, their food was almost gone. But they were in good spirits, rescuers said. Survival experts are praising the parents for doing all the right things to keep the family safe during their harrowing 48 hours. Amazing.

I’m so glad they found that missing family in Nevada. It’s cold out here. God is good 🙏

Stephanie Elam will update us on this story throughout the show.

More miracles: And this may be even more miraculous than the last blog entry. Republicans and Democrats agreed on a budget deal. We know it is hard to believe. And here’s some more good news: If this deal is approved by the House and Senate, it will prevent another government shutdown. So what’s in the deal? Here’s our user-friendly version of the highlights. Leaders from both sides of the aisle were cheering the deal yesterday. U.S. Rep. Paul Ryan, one of the architects of the deal, said it will help government run smoothly. "This agreement makes sure that we don't have a government shutdown scenario in January. It makes sure we don't have another government shutdown scenario in October. It makes sure that we don't lurch from crisis to crisis," the Wisconsin Republican said. President Obama called the deal a good first step. “It's a good sign that Democrats and Republicans in Congress were able to come together and break the cycle of short-sighted, crisis-driven decision-making to get this done," he said.

Tonight's deal is a step toward enacting a budget that doesn't harm our economy or weaken the middle class. Will discuss deal with House Ds.

Dana Bash updates us on this story throughout the show. John King provides analysis at 6.

Memorable moments: The 10-day mourning period for Nelson Mandela continues today. The body of the former South African leader was moved from Johannesburg to Pretoria this morning. A crowd of thousands lined the procession route. In Pretoria, the anti-apartheid icon, who died last week at 95, will lie in state for three days. The first day of viewing will be reserved for dignitaries. The public will be allowed to file past his casket Thursday and Friday.

The viewing comes a day after a massive memorial service in Johannesburg for Mandela. The event, billed as one of the largest gatherings of global leaders in recent history, brought praise from all sides for Mandela and memorable moments for President Obama. You can call it the handshake and the selfie: Obama shook up some when he shook hands with Cuban President Raul Castro, who was among dozens of other world leaders he shook hands with after arriving on stage to pay tribute to Mandela. The greeting quickly sparked a strong debate on Twitter between those who praised and disagreed with it, given that the United States does not have diplomatic relations with Cuba. The White House says the handshake was not planned. Historians say this is not the first time. In 2000, at the United Nations, then-President Bill Clinton shook hands with Fidel Castro.

Please read and share. With Mandela speech, Obama shows he can still stir the spirit http://t.co/z55tOUhXaB

Dear Obama: Funerals Are No Place for Selfies http://t.co/N4upexjO8a via @mashable

Isha Seshay will update us on events throughout the show.

Family speaks: Police released more details about the fatal shooting of a Texas Catholic-college honor student. But the family of the slain student say they still have questions. The student, 23-year-old Cameron Redus, was told 56 times to stop resisting arrest before a campus officer fatally shot him, police say. But there was a mistake made in the traffic stop that affected the incident. The incident happened Friday near Redus’ school, the University of the Incarnate Word. A campus officer saw him driving erratically and pulled him over on suspicion of driving drunk. When Redus pulled into the apartment complex where he lived, the officer followed and called for backup. But the officer gave the wrong address, which slowed the response of other officers arriving. The officer was left alone with Redus, and things went wrong. The student grabbed at the officer's baton, hit him and scuffled with the officer, police say. An audio recording of the altercation showed the officer told Redus 14 times to place his hands behind his back, and informed him three times that he was under arrest, and to stop resisting 56 times, a local police chief said. If other officers were alerted correctly, things may have been different, the chief said. Redus’ family says they are devastated. “I'd give anything if he'd walk right through that door," said Valerie Redus, his mother.

My heart goes out to the family of UIW student Robert Cameron Redus. Shot and killed by UIW police officer OFF CAMPUS.

It's comforting to know that you were so loved, by so many. RIP Cameron Redus.

George Howell reports on this story.

New road: General Motors' newly named chief executive officer will make history right away. Mary Barra, a 33-year GM veteran, will become the first female head of a major U.S. automaker. She takes over officially on January 15, the automaker says. This announcement comes at a pivotal time for GM. It came one day after the U.S. Treasury Department said it had sold its final financial stake in the company, closing the book on its 2009 taxpayer bailout of the auto industry. Remember that? Before taking over the top spot, Barra was an executive vice president and head of product development at the company. Experts say her job will be to keep GM on the positive roll it has been on lately, having introduced several award-winning vehicles in the past year. The Cadillac CTS and Chevrolet Corvette have won prestigious awards recently.

GM has a new General: Mary Barra. Aaaand she’s the first female head of any car company… ever! #next #ICYMI

Tune in during the show for News Headlines with Pamela Brown.

- Person of the year: Time magazine will announce its “Person of the Year” this morning. And it is an eclectic list. Pope Francis, Syrian President Bashar al-Assad, Edward Snowden, Sen. Ted Cruz and Edith Windsor, a plaintiff in the landmark gay marriage Supreme Court case, are all finalists. Rana Faroohar of Time Magazine joins us at 8.

- Obama Xmas song: Not only was the President in a controversial selfie and handshake this week, he also made a holiday song. Well, with a little editing help, of course.

- Round vultures: These guys have made a slew of viral videos by illustrating a question we’ve all asked. What if animals were round?

- Sliding goat: The real question is who would put a goat on a playground slide?

- Mystery piano lady: It has been two years, and still people are trying to find the story behind this lady playing an abandoned piano on a rotting front porch. Who is she?