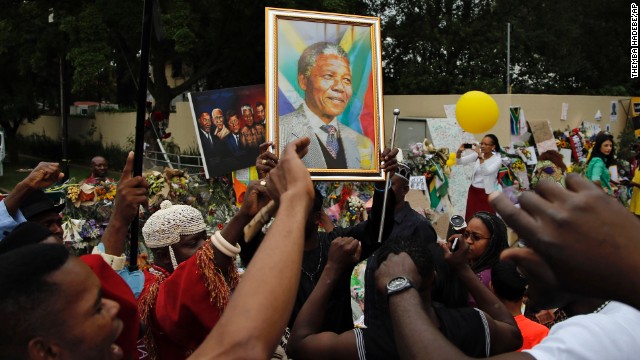 World Leaders joined South Africans at the 90,000-seat FNB Stadium in Johannesburg for a memorial for Nelson Mandela.
December 10th, 2013
04:48 AM ET

5 Things to Know for Your New Day – Tuesday, December 10

World leaders join South Africans to remember an icon, a crucial deal with Iran may be in jeopardy, and rescuers race against the clock to find six people lost on a snowy Nevada mountain.

World remembers: Torrential rains couldn't stop huge crowds from flocking to a memorial service for Nelson Mandela in Johannesburg today. Tens of thousands of South Africans, dozens of presidents and prime ministers and celebrities were all packed into the same place: a stadium to honor Mandela; the same stadium where Mandela made his final public appearance. Dignitaries from around the world arrived in the city to pay tribute. With 91 heads of state attending, security was tight.

On the road to #Mandela memorial service http://t.co/MTfhqKkKgk

Amazing atmosphere in stadium where Mandela memorial will be held. Thousands already in stands chanting and singing

This memorial continues several days of mourning after the death of Mandela, and the funeral and burial are set to happen on the tenth day after his death. The funeral is expected to be on the grounds of his home. It's expected that thousands of people, including dozens of heads of state, will gather for the state funeral, which will take place under a large tent nestled in the hills where Mandela ran and played as a child.

Join Anderson Cooper, Christiane Amanpour, Robyn Curnow, Isha Sesay and the rest of our team for coverage from South Africa.

Staying cold: For the many people dealing with frigid weather, you will have to get used to it. Temperatures in storm-stricken parts of the United States are expected to stay about 10 to 20 degrees below normal for the rest of the week, the National Weather Service said. That's not good news for the East Coast. But not just there; snow is expected all over. One place hoping for good news is Nevada. Two adults and four children went to play Sunday in the snow and never returned. They were still missing early Tuesday. Rescue teams are searching a mountainous area of Nevada for the missing group.

Really want it to snow...but I hate snow... I've got bit of a problem x

Jennifer Gray and Chris Lawrence will update us on this story.

Not so fast: With the ink barely dry on the historic nuclear deal with Iran, it seems as though it could be in peril. A bipartisan group of U.S. senators say they are working on a plan to add new sanctions on Iran. This move is a nonstarter with Iran, and it goes against the White House. In order to get Iran to agree with the nuclear deal last month, the White House had pushed to ease sanctions. What is at stake is huge. Last month, Iran agreed to limit its nuclear program in exchange for an easing of economic sanctions that have crippled its economy. World leaders hope the six-month deal will pave the way to a long-term guarantee that Iran won't produce nuclear weapons.

Jim Sciutto will update us on this story.

Murder or accident? It’s rare to have agreement on both sides of a murder trial. But in this case, the defense and prosecution agree on this much: Jordan Linn Graham pushed her husband of eight days, and he fell off a cliff to his death at a Montana federal park. The question for jurors will be whether Graham's act was murder or a case of self-defense that ended tragically. Both sides, defense and prosecution, gave opening statements Monday. Prosecutors said Graham was having serious second thoughts about her marriage before her husband's death, and they said she lied to police afterward. But defense attorneys said the fall off the cliff was an accident and any lies came from Graham being scared. She was afraid, her attorneys say, she would not be able to explain what really happened on the cliff edge.

Federal trial begins for Montana newlywed accused of pushing her husband of 8 days off a cliff. http://t.co/qRNINp9Vvj

She regretted getting married, so Jordan Linn Graham pushed her husband off a cliff. Sure. Makes sense. #ridiculousness

Joey Jackson and Sunny Hostin join us at 8.

Why? Those who knew him called him the “gentlest person.” But for some reason, police say, Robert Redus snatched a police baton and struck an officer. The officer shot and killed the 23-year-old college student, who was on the dean’s list. This happened Monday near a Catholic college in Texas. And those who knew Redus are asking: How? Why? The incident started during a traffic stop. But the scuffle between the student and a campus officer was not captured on video. A dashboard camera that would’ve usually been on the officer's car had fallen off days before the fatal encounter.
https://twitter.com/_princessjadie/status/410091417982074880

My heart hurts for the family and friends of Robert Cameron Redus. Thoughts and prayers to all being affected by this tragedy.

George Howell will update us on the case at 7. Steve Kardian, a retired police detective, also joins us at 7.

- Meatball on a carousel: Watch meatball, the portly pooch, stay on this spinning carousel for an insane amount of time. It is scary and strangely soothing at the same time.

–Teeter-totter technicians: If you thought Meatball was something, watch these guys.

- Funky Xmas: This Christmas light display is impressive ... the first time. But just imagine living next this home.

- Stranded: What do you think an a capella group would do if they got stranded at an airport? Yeah, you guessed it.

- Best flight ever: Canadian airliner WestJet made some Xmas wishes come true with this one. They asked passengers on a flight what they wanted for Christmas and then went out and got the gifts. When the flight landed, the surprised passengers were greeted with the wrapped presents. Wow! I know the guy who only asked for a scarf is kicking himself.