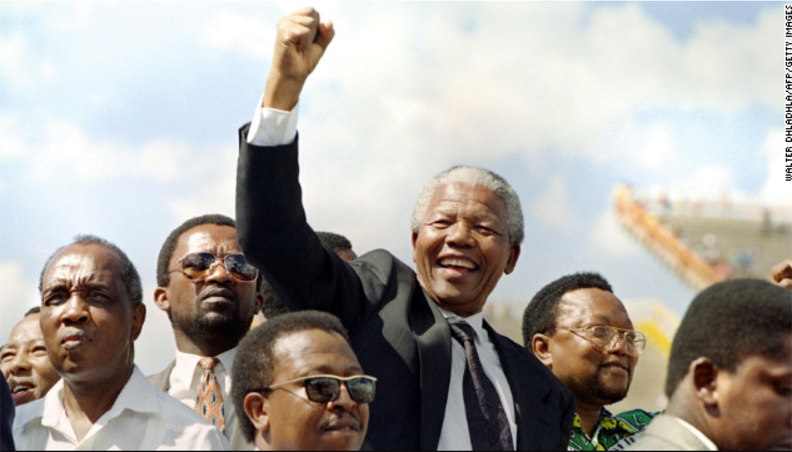 5 Things to Know for Your New Day – Friday, December 6

Hero gone: He spent 27 years in prison. And for some that would have been the end of the story. But for Nelson Mandela it was the beginning. The beginning of an amazing struggle through racism that transformed South Africa and the world ... The world mourned Mandela’s death yesterday. But it also celebrates his unbelievable legacy. He led his country out of decades of apartheid. He shrugged away bitterness and preached forgiveness. He became the country’s first black leader. A revered statesmen. The news came last night. After fighting illnesses for some time, Mandela passed away. "Our nation has lost its greatest son. Our people have lost a father," South African President Jacob Zuma said. He was 95.

"Let us pause and give thanks for the fact that Nelson Mandela lived." —President Obama

His Holiness the Dalai Lama expresses condolences at the passing away of Nelson Mandela http://t.co/da7GkvxU6T

Robyn Curnow and Arwa Damon will be live from South Africa with updates.

Humble, giant: From prime ministers to pop stars to a prince, emotional reactions came from all over the world on Mandela's death. Oprah Winfrey said one of her biggest honors was to meet Mandela. “He was everything you've ever heard and more - humble and unscathed by bitterness.” Indian Prime Minister Manmohan Singh called Mandela a “giant among men …” Former Secretary of State Colin Powell said he was moved by Mandela’s humbleness. “He was a humble, gentle, warm person, even though he was a fighter on the military stage as well as the political stage,” Powell said. U2 frontman Bono talked about Mandela’s legacy saying: “In the end, Nelson Mandela showed us how to love rather than hate, not because he had never surrendered to rage or violence, but because he learnt that love would do a better job.” Prince William was at a premiere of the film "Mandela: Long Walk to Freedom” when he heard. “It is extremely sad and tragic news,” Prince William said.

#MandelaReaction: ANC: nation has lost a colossus, an epitome of humility, equality, justice, peace and the hope of millions; here & abroad

One only need look at the reaction to know Nelson Mandela's place in history. May he rest peacefully.

Nadia Bilchik, a Mandela family friend, joins us at 6. U.S. Rep. Charles Rangel of New York joins us at 7.

Ten days of mourning: For the Xhosa people of South Africa, death is traditionally not something to be talked about or to be planned. But those close to Mandela had little choice when he was ailing and then moved to life support. In the final years of his life, secret plans were hammered out between the government, the military and his family. They knew they had to plan a farewell fitting such a great man. The 10 days of mourning will combine western traditions and those of the Thembu, Mandela's native clan, sources tell CNN. For the first four days traditional leaders will gather around Mandela for a ceremony called "the closing of the eyes." During the ceremony, they’ll talk to him along with tribal ancestors to explain what's happening at each and every stage to ease the transition from life to beyond. Afterwards, it is believed, Mandela’s body will be embalmed.

No public events will be held until the fifth day after his death. On that day tens of thousands of people are expected to converge at a soccer stadium in Soweto for a memorial service. It is unclear if Mandela’s casket will be there. Mandela’s body will lie in state for three more days in Pretoria. The first day dignitaries will get a viewing. On days seven and eight the public will be allowed in. Nine days after Mandela's death, a military aircraft will leave a Pretoria airbase and fly south with Mandela’s casket. His body will be taken to his home. On the 10th day after his death, the funeral will take place outside Mandela's home, sources say. The funeral will be held under a large tent nestled in the hills where Mandela ran and played as a child.

Fareed Zakaria and Christiane Amanpour joins us at 8 to talk about Mandela’s legacy.

New arrest: Two men, police say, may have stolen a piece of the Porsche "Fast & Furious" star Paul Walker was riding in when he died in a fiery crash Saturday. The theft, Los Angeles authorities say, occurred when a tow truck was trying take the charred Porsche away. A piece of the smashed Porsche fell and somebody saw a man get out of a car and snatch it, the Los Angeles Sheriff's Department said. An 18-year-old was arrested and a red T-top roof panel was recovered, according to the sheriff’s department. One other suspect in the case is being sought. The sheriff’s department is seeking charges of felony grand theft and tampering with evidence against both men.

I feel like I knew Paul Walker or something. I'm still trying to accept he's gone. Crazy.

Icy, cold: From Texas to Tennessee, folks were getting hit with bitter cold. And more is coming, forecasters say. In fact the wintry mix had already done more just plummet temperatures and send people running for their coats. In Texas this ice storm has rained on a parade. Literally. Dire forecasts prompted organizers to cancel a holiday parade in Dallas scheduled tomorrow for the first time in 26 years. Schools in various cities canceled classes for Friday, including in Oklahoma City, Tulsa, Oklahoma, Little Rock, Arkansas and Dallas, authorities said. Classes were also canceled for some counties in western Tennessee.
https://twitter.com/BeanoBVB/status/408890236325093376
https://twitter.com/_OllyRiley/status/408886273919975424

Tune in for News Headlines.

Those are your five biggies for the day. The Internet was buzzing about Nelson Mandela. A slew of people tweeted their personal pictures they took with Mandela over the years.

- Larry King: The former CNN host said Mandela was one of his favorite guests.

Of all the interviews I've done Nelson Mandela ranks among the top-he was so eloquent & classy http://t.co/ZOriOUfzOz pic.twitter.com/kPwO9QvVGl

–Fergie: Fergie Duhamel with will.i.am, of the group Black Eyed Peas and Mandela.

Meeting Nelson Mandela at his house in Johannesburg was a truly memorable moment in life for me. He was an angel. pic.twitter.com/PaIX362rYX

- Liverpool FC: A victory photo with a smiling Mandela.