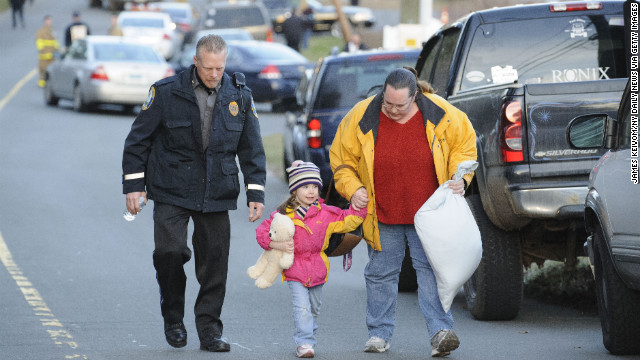 A child and her mother leave a staging area outside Sandy Hook Elementary School in Newtown, Connecticut, on December 14, 2012.
December 4th, 2013
05:06 AM ET

5 Things to Know for Your New Day – Wednesday, December 4

The train engineer may have nodded off before the deadly crash in the Bronx, new video is released in the death of actor Paul Walker and Newtown is set to release school massacre 911 tapes this afternoon.

Nodding off?: The focus now is on the train’s engineer. William Rockefeller Jr. was at the controls Sunday when his train jumped the tracks in New York. The result was disastrous: four people killed and more than 60 injured. Federal safety officials say the commuter train was going almost three times the posted speed limit before it derailed. Early tests show there was nothing wrong with the train's brakes and signals around the tracks. And yesterday, a union rep connected to the case says the engineer "was nodding off and caught himself too late." And that’s not all. Anthony Bottalico, the union representative, also says ”most people are leaning towards human error.” Someone wasn’t happy that the union rep revealed that information. Word came late last night that the union was booted out of the investigation.

Was the #MetroNorth engineer asleep at the controls? Watch the #AC360 report: http://t.co/huuPS8rUXK

Our thoughts and prayers are with the victims and families impacted by the #MetroNorth train derailment in the Bronx. @NTSB @FDNY

Nic Robertson will be live throughout the show to update us on the case. Peter Goelz, a former National Transportation Safety Board managing director, joins us at 7 to talk about sleep deprivation. Elizabeth Cohen joins us at 8.

60 seconds: The Porsche that actor Paul Walker was in erupted into flames a minute after it clipped a light pole, new video shows. And with that comes even more questions. Could Walker and Roger Rodas have made it out in those 60 seconds? Or were they killed on impact? What was going on in that smashed Porsche in that minute before the black smoke started rising? Could the popular "Fast & Furious" actor and his friend have been saved? It’s hard to tell. But we may get answers when the coroner's office finally releases its preliminary findings of their autopsies. When that will happen is unclear. The autopsy was conducted yesterday, but the results have been put on hold.

Every time I read about Paul walker dying or it gets mentioned I get super sad, I really liked that guy

Casey Wian will be live to update us on this case throughout the show.

Sounds of fear: The Sandy Hook Elementary School rampage brought us images we’ll never forget. Police frantically evacuating kids from the school. Stunned parents waiting, tearfully. Today, a year later, we will hear some sounds of that tragic day when a gunman stormed the Connecticut school, leaving 26 people dead. Audio recordings of 911 calls from that day will be released for the first time this afternoon. . The December 2012 shooting was the second-deadliest in U.S. history. The gunman, Adam Lanza, shot himself after his 11-minute rampage. Not everybody is happy that the tapes will be made public. A prosecutor had argued they shouldn’t be released to protect the families of victims.

No one needs to hear those. Ever. MT @cnnbrk: Newtown, police will release 911 calls from Sandy Hook massacre. http://t.co/GUrrk0QxtR

Pamela Brown will be live on this story.

Reboot, relaunch: After deeming the Obamacare website mostly fixed, President Obama went on the offensive yesterday. He hit the road to deliver a message: stop worrying about the website and start talking about Obamacare's benefits. Obama kicked off a three-week public relations surge. He acknowledged that the October 1 launch was fumbled. But he invited the nation to help him relaunch the effort. “If you've got good ideas, bring 'em to me. Let's go,” Obama says. Republican lawmakers did not line up to help the relaunch yesterday. But Republican House Speaker John Boehner did offer his view: “It's not just a broken website, this bill is fundamentally flawed.” Tough crowd.

A branding guru's advice on the damaged brand that is Obamacare http://t.co/Lv0kIKSCrL

The big news in Washington today is that President OBAMA still supports #OBAMAcare – and they wonder why Americans roll their eyes.

In hot water: With all the headlines about this case, you’d think it was celebrity chef Nigella Lawson on trial. But she’s not. It’s two of her former assistants on trial in the UK. The two are accused of stealing some 685,000 pounds ($1.1 million) from Lawson and her ex-husband. But as the trial drags on, it seems more is being said about Lawson, who when she is not in court, can be seen on the ABC reality show “The Taste.”  But today for the first time, Lawson may tell her side of the story when she testifies.
https://twitter.com/Dupsie2111/status/408144811691372545

Producer of @ABC’s “The Taste”: “I am sure 2013 will be the Year of Nigella in America”? http://t.co/ECqnYmsy30 pic.twitter.com/OcodfgvL7X

Erin Mclaughlin reports live on this case throughout the show. Joey Jackson gives us an update at 8.

- Holiday cheer: Nothing says Xmas like a mashed up version of Captain Picard from Star Trek doing a Trekkier version of “Let It Snow.”

- Ethan gets a dog: And since we are on a Christmas theme, remember this viral video? What a reaction

- Scary tire commercial: It’s so frightening, it requires a health warning. No, really.

- Weasel ball: This video really needs no introduction. But here goes. An emus, an ostrich and a weasel in a world most can barely comprehend. Throw in a rainbow color ball and what do you have?

Leave a Reply to Cionna