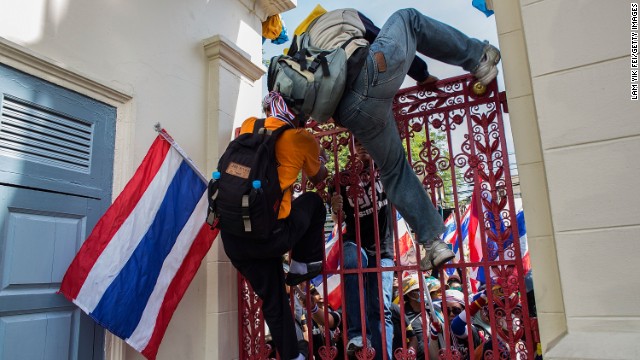 5 Things to Know for Your New Day – Friday, November 29

Thai protesters demand military help to topple the government, tensions between China and Japan escalate, and the clock is ticking toward the Obamacare deadline.

Unfriendly skies: Tensions are growing. China recently claimed an air defense zone above the East China Sea. It has been squabbling with Japan for decades over the disputed islands.  As if that's not enough,  two unarmed U.S. B-52 bombers recently flew through the area in what the State Department described as a planned military exercise. China has threatened military action. But wait ... there's more.  Japanese and American soldiers are in the region conducting a pre-planned training exercise. This year's war games have taken on an added dimension given the high-pressure atmosphere in the region.

Tensions are running high in the skies between China and Japan - and the U.S. is refusing to stay on the sidelines. http://t.co/mzCi0CMajy

Barbara Starr is live at 6.

Ready, set, shop!: Some people take this Black Friday thing seriously. Some take it so seriously that they start on Thursday. Take Qiana Roberts from Philadelphia for example. She said she even skipped Thanksgiving dinner with her family to get in line at Target at 8 a.m. yesterday, some 12 hours before the store opened. Yeah, you heard that right, missed Thanksgiving dinner! "It's hard for me not to go, even when I don't really need anything," said Roberts, who has waited in line at either Target or Wal-Mart for seven Black Fridays straight. "Guess, I'm a little addicted." But Roberts was not alone. By 7:30 that evening, a crowd of about 200 people waited outside for the store to open up. So when you stroll into the store in the middle of the day today, and see empty shelves, you’ll have shopaholics like Roberts to thank.

When I Seen The Lines For Black Friday pic.twitter.com/EOyWCAcijP

Zain Asher will be live from Macy’s throughout the show.

Tick tock: A moment of truth approaches for President Barack Obama's signature health care reforms. Tomorrow is the deadline for the website fix. The hope is that the error messages, the delays, the general mayhem users faced since Obamacare was launched on October 1 will be remedied. Will it be fixed? Some experts wonder if November 30 is too soon to fix all the problems. Julie Bataille, spokeswoman for the federal unit in charge of the website rollout , says despite the deadline, they will keep working. And there could still be issues. "There will be times after November 30th when HealthCare.gov does not function properly," Bataille says. Stay tuned.

So grateful that my son & his family will have coverage under #Obamacare.

Jill Dougherty will be update us on this throughout the show.

Free for now: Marissa Alexander  was freed from prison this week, just in time for the holidays. You may remember the name. She was sentenced to 20 years in prison for firing a gun to scare away her allegedly abusive husband. No one was struck by the bullet. Alexander's case gained the attention of civil rights leaders. They argued that nobody was hurt and the sentence for the mother of three was way too harsh. Last month, an appellate court responded to criticism and ordered a new trial for Alexander. The case will be retried because the jury had incorrect directions, the court ruled. The case also shined the spotlight on Florida's "stand your ground" law. She unsuccessfully argued before her 2012 trial that she was immune to prosecution because of the law. She will be free until she is retried in the future.

Marissa Alexander, is free on bond and home with family in time for Thanksgiving and the holiday season. "Hallelujah" pic.twitter.com/act4WepDc8

Joey Jackson will update us on this case at 8.

No confidence: Thailand’s embattled Prime Minister easily survived a no-confidence vote yesterday in a parliament controlled by her party. But can Yingluck Shinawatra stop what is happening now? Protesters are taking to the streets., making bold demands. Hundreds stormed army headquarters today in Bangkok, demanding help overthrowing the government. Their anger runs deep.  They say she is a puppet of her brother, former premier Thaksin Shinawatra. Thaksin was ousted in a 2006 coup.

What's behind the unrelenting protests in #Thailand ? @jethromullen explains in 10 questions http://t.co/ntrUlfrwzO

Tune in for our Around The World headlines throughout the show.

- Black Friday mess: If you are heading out for Black Friday, you could get some great deals. Or for the unlucky ones, a mess awaits.  Here’s a rule of thumb before you head out: a big screen TV is never worth handcuffs.

- Black Friday bodyguards: Now here are a few buddies you could take with you. Try running into a Walmart with a posse of these screaming, human-sounding goats. People will get out of your way. Shopping will be done in a jiffy.

- Tiger boy: Now this is cute. Little boy, dressed as a tiger, playing with the big cat.

Black Friday pranksters: These guys put on uniforms and pretend they work at big chain stores. They don't, but are pretty helpful. Which makes it pretty funny.