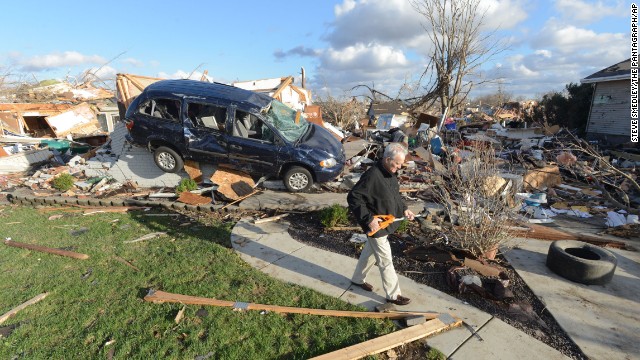 5 Things to Know for Your New Day – Monday, November 18

Brutal storms cut a deadly path through the Midwest, The Toronto City Council tries to neuter the mayor, and a North Carolina sheriff finds a boy handcuffed to a porch with a dead chicken around his neck.

It's Monday, and here are the “5 Things to Know for Your New Day."
Every weekday morning around 6, we’ll hit the top five stories of the day, clue you in on a few other buzzy items and let you know about some of the must-watch stories coming up on CNN’s morning show “New Day.”

Deadly storm outbreak: Severe weather slams the Midwest, killing six people as dozens of tornadoes roar across the heartland on a rare spring-like day in mid-November. The central Illinois town of Washington appears to be the hardest hit. CNN iReporter Anthony Khoury captures the tornado hitting his neighborhood.

A preliminary survey by the National Weather Service says an EF4 tornado, packing peak winds of 166 mph, ripped through Washington County, leaving a path of debris that stretched more than three miles. Daylight is expected to reveal the storm system's full fury.

My thoughts are with those of Illinois, especially those who were killed by the massive storm sweeping the north.

Chris Cuomo reports live from the storm zone throughout the morning.

Vaccine dilemma: Princeton's board of trustees is expected to decide this week whether to offer students emergency shots of a vaccine to protect against a rare strain of meningitis. It has not yet been approved for use in the United States but has been given the OK in Europe and Australia. Seven cases of the potentially fatal disease have occurred on campus since March.

Meningococcal is some nasty stuff, I'd use a flame-thrower to fight it if I had to. http://t.co/54jtkfvpF3

Alexandra Field is tracking the story.

Chipping away the power base: The Toronto City Council takes another crack at Mayor Rob Ford today. While council members can't remove him from office, they are stripping some of his powers. Last week, they took away his ability to govern in an emergency and to appoint and dismiss committee chairs. Today they'll consider motions to delegate more of his duties and reallocate the operating budget. In the heat of the battle, his brother Doug Ford, a member of the City Council, suggests he take a couple of weeks off to let things cool down.

Recent weeks are littered with outbursts and apologies from the Toronto mayor. Last week, Ford responded to an allegation of requesting to perform oral sex on a female staffer in the most vulgar terms. While he did deny that allegation and others of drunkenness, drug use and the verbal and physical abuse of aides, he earlier admitted to smoking crack cocaine while in a "drunken stupor" and purchasing illegal drugs since becoming mayor.

Ever get the feeling Toronto Mayor Rob Ford wanted to be a Pro Wrestler, but got the crappy political gig instead? #3amThoughts

Bill Weir rolls out his reporter's notebook on the colorful and controversial Toronto mayor this morning.

Handcuffed to a porch: Here's the scene. A neighbor reports seeing a boy shivering in the cold, wearing just a T-shirt and jeans. A North Carolina sheriff finds the 11-year-old with a dead chicken around his neck and his ankle handcuffed to a post. Not surprisingly, foster parents Wanda Sue Larson and Dorian Lee Harper have some explaining to do and now face charges of intentional child abuse inflicting serious injury, false imprisonment and cruelty to animals. Harper and Larson are expected to appear in court this morning. Four other children, ages 8, 9, 13 and 14, who were adopted by the couple are in protective custody.

Exposing children to conditions like this is just cruel and unusual punishment. The parents must face jail time ! http://t.co/2dt7lblnlk

Michaela Pereira brings you news headlines throughout the morning.

High-flying orders: Persian Gulf-region airlines lead the way as a record $192 billion in jetliner orders are announced at the start of the Dubai Airshow. The Middle East is a major player in the aviation world these days as the nexus between the United States, Europe, Africa and Asia. By ordering all the planes, carriers like Etihad, Emirates and Qatar Airways plan to be major players. The nations of the region are doing their part too. Dubai's Al-Maktoum airport in the United Arab Emirates is the city's second international hub and is predicted to be the world's largest when it's completed. Saudi Arabia and Qatar are building their own massive airports or expanding existing ones.

Lots of expensive planes bought at #DubaiAirshow http://t.co/DyAa50kGFT so what does it mean for aviation?

- Big boys and their toys: Sure, Dubai is on the verge of having the biggest airport in the world. But do they have this: a mega-big, radio-controlled jetliner? This is certain to set off an RC arms race.

Tonight's show goes out to our FRIEND @Amateurchemist. Wish you were here, man.

- Uber wedding video: Life used to be so much simpler. An old-school wedding video consisted of the nuptials, cutting the cake and a drunk Uncle Joe dancing with one of the bridesmaids. Carissa and Adam take it to a whole new level.

- Traffic stop nightmare: Well, this got out of hand didn't it? A simple traffic stop in New Mexico turns crazy when a mom with a minivan filled with five kids gets pulled over for speeding, her 14-year-old son tussles with a state cop and another officer fires on the van as she leads them on a high-speed chase. Pretty much everyone involved is in trouble.

- Roll with it: Here's something you probably missed at the SCORE International Baja 1000 last week. Adrian "Wildman" Cenni completes the first ever ground-to-ground 360° barrel roll in a 4-wheel vehicle.

Toronto's City Council voted Friday to strip Ford of his ability to govern in an emergency and to appoint and dismiss committee chairs - unprecedented moves aimed at reining in the controversial politician.

Ford refuses to resign and his TV show premieres tonight.

Defending himself repeatedly during the interview, Ford remains enthusiastic despite the scandal surrounding his office.  Weir discusses the tense exchange on New Day.

Also, be sure to stay with CNN as more of Weir's exclusive interview with Rob and Doug Ford will be on "AC 360" tonight at 8pm ET.