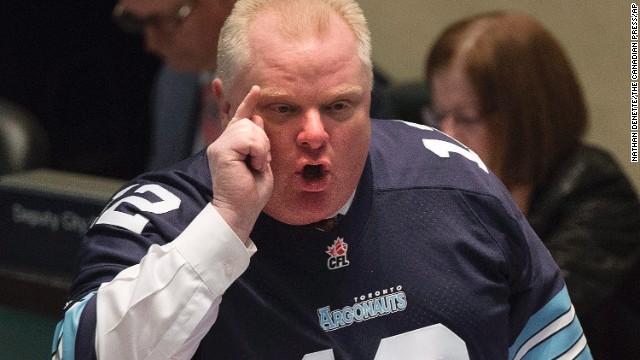 5 Things to Know for Your New Day – Friday, November 15

The president apologizes for the Obamacare problems, Toronto's mayor drops another political bomb and Syrian rebels behead one of their own.

President's mea culpa: A humbled Barack Obama apologizes for the problems plaguing the rollout of the Affordable Care Act and promises to fix them. With sagging poll numbers and sniping within Democratic Party ranks, this is serious stuff. The president says those who were about to lose their insurance because it didn't meet Obamacare standards can keep their plans for another year. Still, it may not work for everyone. The White House can't force insurance companies to continue to write the old policies. Republicans smell the blood in the water. Many didn't want Obamacare to begin with. For now, it will be up to Democrats to help save their leader, if they're not too busy trying to save themselves. There's only so much room in the lifeboat.

Facing the facts: A week after Typhoon Haiyan tore through the Philippines, the adrenaline-fueled response to the storm and its aftermath have faded from the streets of Tacloban. Now, the grim realities of daily life have taken over. Things are a mess, and there's a lot of work to do. The death toll continues to climb, now at 3,621. Mass graves are collecting the dead. Tons of relief aid are coming into the country, but still haven't reached the most desperate. Despite the devastation and death, there are signs of hope. Rubble is being cleared and more help is being deployed. The USS George Washington, an aircraft carrier with 5,500 crew, has docked. Eight more American ships are helping out. The people of the Philippines will need a lot of patience, when not much is in stock.

Ivan Watson is live from the Philippines.

He did not say that: Well, actually Rob Ford did, but we can't. When a politician blurts out something about oral sex in the most vulgar terms, it's kinda hard to get it past the editors. It was colorful stuff yesterday as Toronto's mayor denied a female staffer's allegation that he sought to perform oral sex. Suffice it to say, Ford apologized a few hours later. Here's the scorecard, if you've lost track. Ford has already admitted to smoking crack cocaine while in a "drunken stupor" and purchasing illegal drugs over the past two years. Court documents released this week contain explosive new allegations of drunkenness, drug use and the verbal and physical abuse of aides. Ford says they're all lies. The city council has asked him to take a leave of absence. They don't have the power to force the mayor from office. It's just a friendly suggestion. Anything else? Yes. Ford says he and his brother Doug will host a new TV show, starting next week.

My message to the mayor: You have sat here too long for any good you have been doing. In the name of God, go.

Does anyone else wish Rob Ford's antics came before Halloween? Would have made one hell of a costume

Nic Robertson reports on the mayor's developing saga at 7 and 8.

Andy's alive, no never mind: Things are never easy when it comes to Andy Kaufman. He always made you second guess yourself in life and that's still the case nearly 30 years after his death. This week, his brother Michael told a rambling tale at a comedy club, saying that Andy was still alive and then presented a young woman who was supposed to be his daughter. Now Michael says he believes he's the victim of a hoax. Or maybe the joke's on us. Just to add a dose of reality, the Los Angeles County Coroner says the comedian and actor died in 1984 from a rare form of cancer at age 35.

Everybody should know by now that the JFK assassination was just a funny prank set up by Andy Kaufman.

This is one of many surreal moments from the comedian's career - Andy Kaufman imitating Archie Bunker and Elvis on "The Tonight Show."

Michael Kaufman is a guest at 7.

Rebels kill one of their own: Radical anti-government fighters in Syria mistakenly beheaded a wounded fellow rebel soldier after assuming he was a supporter of President Bashar al-Assad. A spokesman for the al Qaeda-affiliated group called for forgiveness after the mistake was revealed. The Syrian rebels need a better system of identifying their friends.

- Damme impressive: They don't call Jean-Claude Van Damme "the Muscles from Brussels" for nothing. At 53, the martial arts action film star still has it. We just hope he didn't hurt it in filming this commercial.

- Playing chicken: This is the fowlest video we could find. A baby chick plays follow the leader with a man's hand. Priceless, isn't it?

- Smoke rings: This would be a neat party trick if there was enough room in your house for Mount Etna. The iconic Sicilian volcano has been puffing out perfect smoke rings in the blue skies over the Mediterranean. No one knows how Etna pulls it off, but it's pretty cool.

- Jingle balls: What football is to Thanksgiving, basketball is to Christmas. Each year, the NBA fills the post-holiday bliss with a game or two (or three or four or five). Not quite in the mood yet? Check this out.

- Baby spa: You'll either find this extremely tender or very creepy. A nurse who cares for newborns in France has come up with a new way to bathe infants called caress-bathing. Near as we can tell, it's supposed to be a womb-like experience for the little ones. Except in this case, it's a womb with a view.