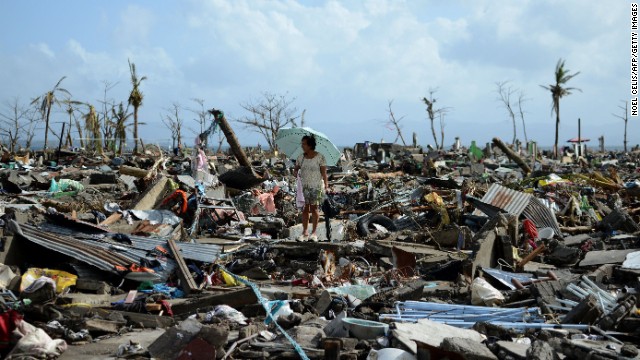 A woman in a hard-hit area of the Philippines walks amid the debris of destroyed houses on November 11.
November 12th, 2013
04:49 AM ET

5 Things to Know for Your New Day – Tuesday, November 12

Unimaginable destruction in the Philippines, no nuclear deal with Iran and an unfriendly response for Toronto's crack-smoking mayor.

Devastation: It's been four days since the monster storm came to the Philippines. And it’s still impossible to know the full extent of the despair. The official death toll was close to 1,800 early Tuesday morning. But some devastated areas were impossible to get to and it was feared that as many as 10,000 people were dead from Typhoon Haiyan. The storm, perhaps the strongest in recorded history, leveled villages and left hundreds of thousands homeless. Many had tales of horror. "We have bodies in the water, bodies on the bridges, bodies on the side of the road," said Richard Gordon, chairman of the Philippine Red Cross. Aid was pouring in from all over. Millions were pledged from the United Nations, the European Union, the UK and the United Arab Emirates. U.S. Marines were there helping. But the scope of the destruction seemed hard for many to handle. A congressman in one hard-hit area said people were getting desperate. "We can't wait. People have gone three days without any clean water, food and medication," he said.

Lets do More than just sending Thoughts and Prayers. They need Food , water, and shelter http://t.co/PZKStxafZG

Andrew Stevens, Ivan Watson, Paula Hancocks and others are scheduled to give updates on the rescue and relief efforts.

No deal: There were optimistic signs this weekend from the talks aimed at stopping Iran from developing a nuclear bomb. The U.S. and Iran said an agreement may come. But in the end there was no deal.  As has happened so many times before, the talks in Geneva between a group of world powers and Iran disintegrated, leading to finger-pointing from all sides. U.S. Secretary of State John Kerry seemed to blame Iran, bringing a fiery response from Tehran. And now, it seems, we're back to where we started. The effort will persist and Iran will continue to be hit with crippling sanctions. All sides plan to meet again later this month.

> Iran is on its knees economically & it's possible to get a better deal. Before the sanctions are lessened, get a good deal, not a bad deal

Jim Sciutto updates us on this at 6. Fareed Zakaria gives his perspective at 8.

More bad news: Talk about adding insult to injury… The Miami Dolphins had a chance to quiet some of the critics last night. Embroiled in a bullying scandal, the Dolphins had an opportunity to get some good press in a game against the Tampa Bay Buccaneers, the worst team in the NFL . Well, they lost. It may not have helped that they played without two of their starters, Richie Incognito and Jonathan Martin. As you may know, Incognito, the alleged bully, was suspended after being accused of pushing Martin to quit. Many gathered last night to watch the game and see if the Dolphins could play well despite the controversy. The answer seemed to be a resounding no.

If you thought last week was bad for the @MiamiDolphins, this week will now be even worse. Ug.

“ This game is a testament to perseverance and determination; that no matter what, the Miami Dolphins can still manage to lose.”

CNN’s Joe Carter joins us at 8 to talk about the game and the controversy.

Boo: That’s what Toronto Mayor Rob Ford heard yesterday. The embattled mayor made his first official appearance since last week’s admission that he had smoked crack cocaine. The response was mixed, Canadian media reported. Ford soldiered through a short speech about Canada’s Remembrance Day, fighting through boos and a sprinkling of cheers. His speech can be seen as a metaphor. Ford says he will fight for his job, despite the scrutiny, the horrid headlines and the pesky fact that he first denied, then admitted, to smoking crack. Editorial writers at Toronto’s Globe and Mail newspaper were not impressed. They penned a scathing editorial about Ford’s appearance that contained this line: “Thanks to your actions, Toronto is mocked around the world as the city with the lying, crack-smoking mayor, whose confession to hard-drug use came as the result of a police investigation.” Ouch.

If #RobFord does walk in the Santa Claus Parade, everyone should bring ripe tomatoes, they make a lovely splat!

CNN’s Bill Weir reports on this story at 7.

Low numbers: So how many people have plowed through all the problems on the Obamacare website and actually enrolled? Less than 50,000, the Wall Street Journal reports. That's far less than expectations, but it may not be a surprise. The October 1 launch of HealthCare.gov has been plagued with drama.  An administration health spokeswoman says she can’t confirm the Wall Street Journal’s report on the dismal numbers. But “as we have said, the problems with the website will cause the numbers to be lower than initially anticipated," added Joanne Peters of the Department of Health and Human Services. The administration has said it will release official data later this week.

Obamacare means "you HOPE to keep your current healthcare plan, but the POTUS will CHANGE it no matter what you think. #harvardsfinest

John King joins us at 6 and Jim Acosta gives us the latest at 7.

Those are your five biggies for the day. Here are a few other stories that are brewing and have the Internet buzzing.

- Whoopi and the VP: See if you can write a caption to this encounter that Vice President Joe Biden’s office says was completely coincidental. Biden was taking the train to his home in Delaware Friday as he is famously known to do. And he bumped into Whoopi Goldberg… Imagine the hilarity that ensued.

- Star Wars baby: There is nothing unusual about this video. We're wondering why it's on the verge of going viral. Don’t most people use the Star Wars theme to get their babies to stop crying?

- Professional scooter dog: We think this dog has been on a scooter before.

- Cool cat versus a gang: This cat is a pretty cool customer after being accosted by this gang of aggressive puppies.