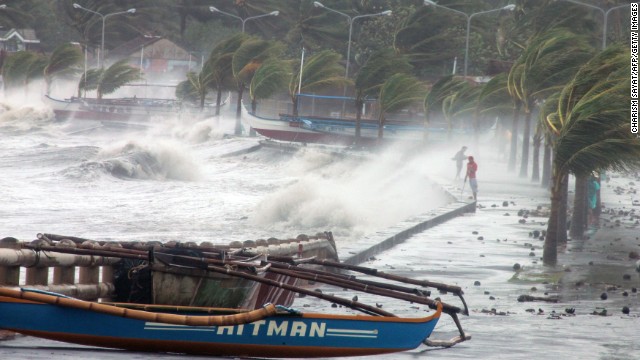 Super Typhoon Haiyan, one of the strongest storms recorded, smashed into island after island as it plowed across the central Philippines today.
November 8th, 2013
05:24 AM ET

5 Things to Know for Your New Day – Friday, November 8

President Obama's sorry he didn't live up to his health care promises, CBS is reviewing its Benghazi report and Toronto's mayor threatens to kill in a new video.

It's Friday, and here are the “5 Things to Know for Your New Day." Every weekday morning around 6, we’ll hit the top five stories of the day, clue you in on a few other buzzy items, and let you know about some of the must-watch stories coming up on CNN’s morning show, “New Day.”

Broken promises:  A big “I’m sorry” from the White House for not quite getting the whole Obamacare thing right.  First it was the website. Now, President Obama takes the hit for many Americans losing their insurance plans even though he said they wouldn’t. “I am sorry that they are finding themselves in this situation based on assurances they got from me," he told NBC News.  Republicans have hammered Obama since insurers started discontinuing coverage for some as a result of the Affordable Care Act.  What’s next?  Health and Human Services Secretary Kathleen Sebelius says she has an “important announcement” related to Obamacare today.

Athena Jones will be live at 6, 7 and 8 with more details.

Misleading report? Did a source lie to CBS News? That's the question after the news company said it's reviewing a "60 Minutes" report on Benghazi over questions about a source’s account. The report raised doubts about the Obama administration's response to the attack on the U.S. diplomatic compound in Libya. The source, a former defense contractor, claimed he witnessed the attack that killed the U.S. ambassador and three others last year. CBS did not provide details on its decision, but said it has new information "that undercuts" the source's account.

We'll bring you the latest on this story all morning.

Historic punch: One of the strongest storms in recorded history slammed into the Philippines today.  It plowed across a cluster of islands in the heart of the country, snapping palm trees with its howling winds.   At least one person is dead and tens of thousands evacuated. And the trail of devastation is slowly coming to light.   Trees are down, flooding is widespread and communication in some areas is entirely wiped out.  President Benigno S. Aquino III is warning that the nation faces a calamity. "Let me repeat myself: This is a very real danger,” he said.

Based on latest projections, we estimate some 2.5 million people will require emergency food assistance in the aftermath of Typhoon #Haiyan.

Andrew Stevens will fill us in on the latest all morning.

The sequel: First, it was a video of Toronto Mayor Rob Ford purportedly smoking crack. Now there’s a second one, this time of him ranting and swearing.  In the latest bizarre video obtained by the Toronto Star, he threatens to kill someone.  “I'm gonna kill that (expletive) guy. I'm telling you, it's first-degree murder," the agitated mayor shouts. The context of the video is unclear. But with the latest revelation, the mayor says he has made some mistakes. “I was extremely, extremely inebriated," he says. And attention is now turning to his well-being.

Outrage and jokes about #RobFord I think now need to turn to sadness for him and his family. He needs help, I feel for his family.

Zoraida Sambolin will be live at 6 and 8 with more details.

Getting closer to a deal?  Is there a breakthrough in the nuclear talks with Iran?  Things are serious enough that Secretary of State John Kerry is returning to the negotiating table today in Geneva.   If there is an agreement on how to rein in the Iranian nuclear program, the U.S. promises a carrot.  President Obama says Iran will get "very modest relief" from economic sanctions if it halts advances in its nuclear program.

Karl Penhaul will give us the latest at 7.

Cat’s meow: If you can't train your pet to grab you a beer from the fridge, at least you can make it talk.  Just upload a picture to the “My Talking Pet” app, and it will animate its mouth and eyebrows.  Not sure if this is brilliant, or just a prelude to interspecies insubordination.

Together, yet apart: This tub gives you some couple time, but with a little more space. The only question is – do you want that space so bad that you’re willing to pay $55,000 for it?   Maybe not. But it sure makes tubby time so much fun.

A tangled web: Ladies, this one's for you. Next time you’re thinking of a little hanky-panky with a married man, remember this website. Shesahomewrecker.com posts pictures and details of alleged mistresses, not the cheating husbands.

Twitter IPO #success: It’s official. Wall Street #hearts the little blue bird.  It made a stellar debut yesterday on its first day of public trading, leaping over 70% past its IPO price. “Phew!” tweeted Anthony Noto,  the IPO’s lead underwriter. It was a pretty rough day for stocks not named Twitter.  Phew, indeed.

Aspiring cosmonaut? This video of a boy turning 360 degrees on a swing in Russia makes us want to leave the office and head to the playground.  Throw in the dramatic music, and that’s it, we’re outta here!

There you go. All you need to know to get an early start to your morning. Be sure to tune in to "New Day" from 6 to 9 a.m. ET. Join us at NewDayCNN.com and go and have a GREAT NEW DAY!

Leave a Reply to dave