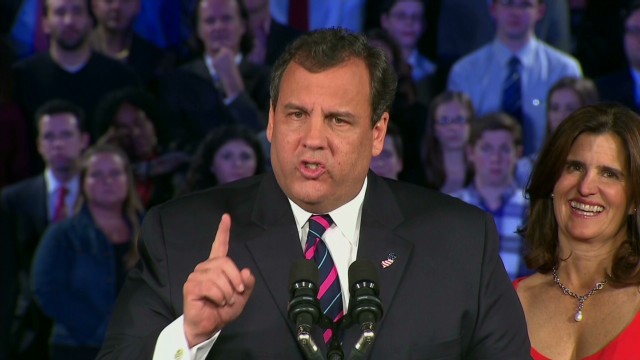 The morning-after: Lots of key elections last night as we start  revving up for the White House race in 2016. Gov. Chris Christie won re-election in New Jersey. And he's already starting to talk like a presidential candidate.

Mcauliffe begging for bi-partisan support in speech... LOL facing a super majority GOP in VA... LOL. What a dork. It's not going to happen.

In New York City, the race for mayor was never in question as Democrat Bill de Blasio defeated Republican Joe Lhota, by a 3-to-1 margin, making him the first Democrat to lead the nation's largest city in a generation.

Going to be interesting to see how De Blasio does as the mayor of New York.

It's all hands on deck this morning as the CNN political team joins "New Day." Watch for updates from John King, Jake Tapper and Athena Jones.

More bad news: A stack of daily updates by Obamacare contractors shows the October rollout of HealthCare.gov had more problems than we were first told about. In the first days, half of the calls to the phone center had problems, paper applications could not be processed and up to 40,000 people at a time were sitting in the website's waiting room. And another thing, the president is subtly shifting the pledge he made to the American people.  Remember when he said, "If you like your plan, keep your plan." In a lot of cases, you can't do that anymore. No apologies from the White House.

Questions for the faithful: Pope Francis, never a pontiff afraid to stir the pot, asks bishops worldwide to conduct a survey on gay marriage, birth control and divorce. Call them questions facing modern families. It's not so much a public opinion poll, but a survey "aimed to solicit information about pastoral practices and public attitudes in different societies," according to the Catholic News Service. The National Catholic Reporter says Archbishop Lorenzo Baldisseri has asked bishops' conferences to distribute the poll "immediately as widely as possible to deaneries and parishes so that input from local sources can be received."

Hi fellow Catholics..what do you know about a poll of Catholics by the Vatican in regards to gay Marriage etc...?

Erin McLaughlin reports on developments from the Vatican at 6.

Sidelined Dolphin: Miami lineman Richie Incognito says he's "weathering the storm" after the team benched him following allegations of misconduct against a teammate. "You know, I'm just trying to weather the storm right now. And this will pass," he tells CNN affiliate WSVN outside a doctor's office in Weston, Florida. Incognito says he doesn't want to comment on media reports that he sent line-mate Jonathan Martin voice mails containing racial slurs and threats of physical violence. The NFL and the team say they're investigating.

Everyone is hating on Richie Incognito, but I bet most NFL teams would still sign him right now if they could

"If the evidence is factual, Dolphins guard Richie Incognito is a racist, a bully and one of the lower forms of life known to man"

Tried it? Yes. Addict? No: How's this for an admission? Toronto Mayor Rob Ford says he's smoked crack cocaine in the last year or so. But wait, there's more. When did he smoke it? "Probably in one of my drunken stupors." It's always good to have the proper context. Ford says he won't step down and plans to run for re-election next year.

Recently, my favorite aspect of living in London is that I get to enjoy half a day without any Rob Ford drama #TOpoli #expat

Paul Newton joins "New Day" live at 6 with the latest on this intriguing story. Political commentator and radio host Supriya Dwivedi adds her insights, also at 6.

- Mona Lisa, where's your hair?: The ANT Foundation of Italy sure knows how to make a point, using Leonardo da Vinci's iconic painting to raise money for cancer patients. The poster below says: "A tumor changes your life. Not the value of your life." The group provides free care and assistance.

- Knock to unlock: A new app lets you unlock your Mac by knocking on your iPhone. The Knock app uses a Bluetooth link between your Apple phone and computer to do the trick. Don't be a hater, the developer has bigger plans. Just think of the possibilities, someday you might be able to knock on your phone and open a door.

The following video has nothing to do with the new iPhone app. It's just an excuse to throw in a show tune we thought of while writing the story.

- Surprisingly normal: You won't believe what Marilyn Manson looks like without makeup. The goth rocker makes a cameo on "Eastbound and Down."

- Skateboarding madness: This guy is either incredibly good or incredibly stupid. Maybe both. He's skateboarding down a steep, windy canyon road at breakneck speed, even throwing in a few snowboarding moves. Remember, safety first. We don't want him to bust his asphalt.