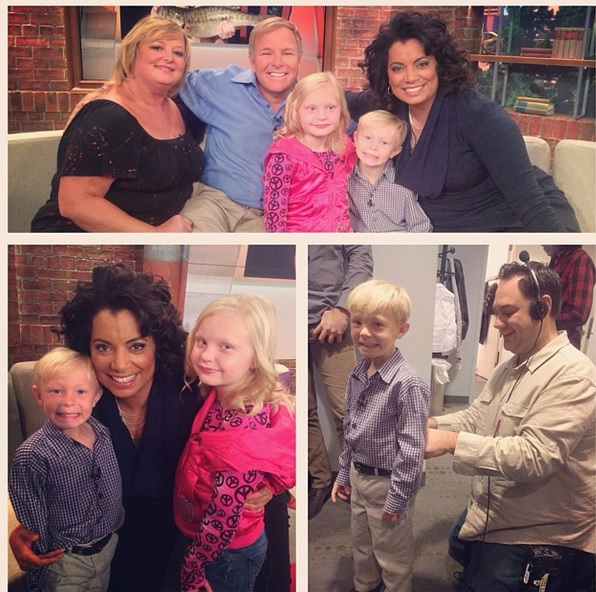 GATOR AT THE AIRPORT

You've heard of snakes on a plane. What about a gator at an airport?

Here's an alligator that was found under an escalator at Chicago's O'Hare.

An airport employee used a broom and a dustpan to capture the foot-long gator before it was handed over to a local reptile society.

It's nicknamed "Allie" by employees and will eventually be placed in a permanent home in another state where conditions are a bit warmer.

Extraordinary images captured in Canada, as Huy Griffiths had his camera rolling and recorded this electrically fueled fireball blazing down power lines outside of his family's home near Montreal.

The family had been without power after high winds in the area knocked down power lines.

This was the second of two fireballs the family had witnessed on Friday evening.

Ford tells the "New Day" anchors Monday about his character.

"The imaginary world in which the story takes place is the future, when Earth has been visited by an invasion of another life form on Planet Earth. We have a world government and I am a commander of a training station which trains young people to fight this threat through drone warfare."

CNN's Kate Bolduan asks Ford about his past experience starring in "Star Wars." Ford says, "What it's always meant to me is a fantastic opportunity. The success of that film really gave me opportunities I would never have had. And I'm forever grateful for that."

Bullying In The NFL?

The Miami Herald reports, citing an unnamed source, that veteran players are allegedly pressuring younger players to pay for their high-priced outings.  One unnamed rookie player is nearly broke because he can't say no to the older players, the source told the Herald.

Martin allegedly left the Dolphins after an incident with a group of players standing up and leaving when he tried to join them for lunch. The NFL is conducting an investigation and the team released a statement saying in part:

"We are taking these allegations very seriously and plan to review the matter further."

This comes on the heels of an ESPN report over the weekend that offensive lineman Richie Incognito pressured Martin into paying $15,000 for a trip to Las Vegas that Martin wasn't even on.

"@espn: Shame on you for attaching my name to false speculation. I won't be holding my breathe for an apology."

Late Sunday, the Dolphins indefinitely suspending Incognito pending the outcome of the investigation.

Psychiatrist Dr. Gail Saltz weighed in on "New Day" Monday defining the difference between hazing and bullying and said anyone can be picked on, no matter their size.

Dr. Saltz said, "You don't know what happens in private moments. Hazing is hard to get rid of because a group feels like, well we went through it and it's part of being in the camaraderie, but you don't know what goes on behind closed doors to one individual."