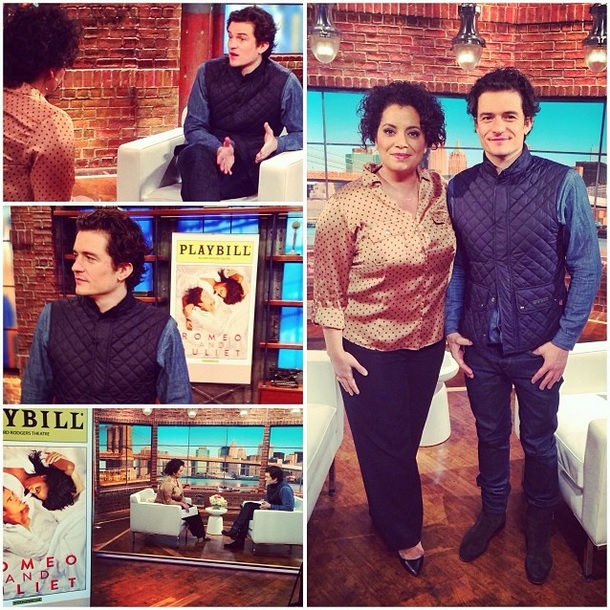 In today's edition of the "Good Stuff" – Noah Fisher from South Carolina. He's 4 years old and he ran into a problem with his vision where he needed a pair of glasses. So his parents bought him a pair and his response just devastated them. He said that everyone would laugh at him.

So Mrs. Fisher turned to the internet to get some help with making Noah feel better about life with glasses. She started a Facebook page titled "Glasses for Noah," urging people to help him adjust and show him glasses can be cool.

More than 1600 people liked the page, with hundreds of them posting pictures of themselves wearing their glasses along with words of encouragement.

CHECK OUT VIDEO ABOVE.

It's Black Friday, but several stores got an early jump on the shopping frenzy. The doors at Macy's opened at 8pm last night as bargin hunters raced to be the first to snag the best deals.

When Pereira asked about the controversial decision to open the store on Thanksgiving, he responded:

Orlando Bloom has played an elf whose pal is a dwarf, a swordsman whose pal is a pirate and now, a guy in a doomed relationship with a girl named Juliet.

Check out his interview with CNN's Michaela Pereira:

MP: Broadway debut…it's hard for me to believe that that is the case…

OB: Yeah, it is. Especially with "Romeo and Juliet."It was hard for me to believe. It has been a remarkable experience. We've got a couple of weeks left and we've had like 12,000 students through the doors taking advantage of our 20 dollar tickets, which is great! They do a special release early on in the run and for students to be able to get tickets and it has been an amazing experience I have to say.

MP: Can we speak for a minute, how great was it to see your name in lights on Broadway? That's a pretty big moment, I am sure you've had several pinch me moments throughout your career.

OB: It's a very special moment, I mean to be here in NY. I am in love with this city now and that community of Broadway is a wonderful thing and I hadn't been prepared for it until I became a part of it. They really support one another, they feel like they are there for one another. The different houses,the different productions and actors see each other for drinks afterwards and it's a hangout, and it's not pretentious or uptight in any way. It's a very accessible world and real and people know what they are doing. They are killing themselves, in my case 8x a week. You know literally killing myself as Romeo or absolutely killing themselves on Broadway in musicals, which is…

MP: Well talk about that. Night after night when you do a run, I know in film you have to do several takes of one scene but redoing an entire production night after night it takes a certain something as an actor, doesn't it?

OB: I have learned a lot, this is my 1st time and a Broadway audience is different to any other audience in the world. (MP:how so? Expectations higher?) there is absolutely that but they really are engaged. (MP: that's true) They are really there, they are like the third wheel of production. If they are with us, we can have a performance that blow people away and if not it's like… (MP: Crickets) Yeah. It is interesting how that as a performer you have to be conscious of that work that you did in the rehearsal room and yes it develops but it is also for me about playing the truth of the moment and the word that goes on that people can connect to and not playing the audience, which I think could happen. But in a way there is a little bit of that that goes on too, which is kind of important. I have been learning a lot about that, which is really rare.