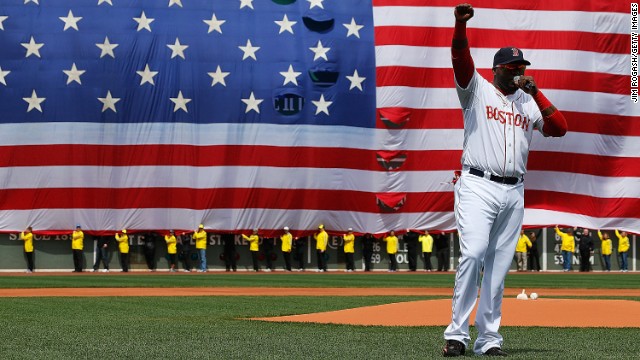 5 Things to Know for Your New Day – Thursday, October 31

Boston proves it's still strong, another Obamacare apology and Brazilian police are trying to solve a nightmarish crime.

It's Thursday, and here is your Halloween edition of the “5 Things to Know for Your New Day."
Every weekday morning around 6, we’ll hit the top five stories of the day, clue you in on a few other buzzy items, and let you know about some of the must-watch stories coming up on CNN’s morning show, “New Day.”

Boston strong: So as you know the Red Sox won it. They beat the Cards to take the World Series. Not to get all serious, but after what Boston went through this seems fitting. After the Boston Marathon bombing in April and all the death and chaos, it was Boston Red Sox slugger David Ortiz's bravado that seemed to help. Big Papi famously told Boston fans “This is our f***ing city. And nobody's going to dictate our freedom. Stay strong." Boston did stay strong faced with incredible violence. The town got back to work and their ball team got back to some serious play. Now Wednesday night they got to celebrate.

The night just got even better. So glad he got to go to the game! #BostonStrong pic.twitter.com/82dlVjN9Tv

I've always been a Yankees fan, so it goes without saying i hate the Red Sox. But this team deserves it. #2013worldchampions #BostonStrong

John Berman will join us throughout the show on this story. John King joins us at 6. Boston Globe writer Dan Shaughnessy joins us at 7.

Bad timing: How’s this for bad timing. Yesterday when Kathleen Sebelius was on the hot seat in Congress vowing to get the Obamacare website fixed – the site was still partially down. Her words were no match for the screen showing that HealthCare.gov was telling its users: "The system is down at the moment." Still the health chief apologized during her 3½-hour congressional grilling Wednesday."Hold me accountable for the debacle," she said. Republicans have called for Sebelius’ firing. President Obama says he supports her but you can also add him to the list of critics of the Obamacare website. Obama told a crowd yesterday the site was too slow and too many people "have gotten stuck, and I am not happy about it." He added: "There's no excuse for it. And I take full responsibility for making sure it gets fixed ASAP."

ObamaCare is a disaster and Snowden is a spy who should be executed-but if it and he could reveal Obama's records,I might become a major fan

"Both parties working together to get the job done—that's what we need in Washington." —President Obama on #Obamacare

Brianna Keilar will update us throughout the show. Marc Lamont Hill from the Huff Post Live and Will Cain, a CNN political commentator, will join us at 7. Senator Lindsey Graham from South Carolina will join us at 8.

Answers: A U.S. Attorney today may move us closer to answers in this mysterious case. The federal prosecutor says he will make an announcement Thursday in the death of 17-year-old Kendrick Johnson. A major development because there’s been so many questions. Medical examiners say the teen suffocated in January after getting stuck in a rolled up gym mat in a Georgia high school. A former FBI agent who looked at death scene images obtained by CNN says he thinks it was foul play. Johnson’s family and a growing number of people believe that the teen was killed. In September, the same U.S. Attorney said he was reviewing the case and trying to determine if he will investigate. Today we may get an answer ... Well at least to that question.

I really wanna see all the Kendrick Johnson stuff settled.

Victor Blackwell will join us live at 7.

Grisly discovery: A former Brazilian professional soccer player seemed to have retired to a quiet life. Joao Rodrigo Silva Santos went from an exciting sports life to owning a health food store. Not a typically dangerous profession. But this week, his wife found his severed head on their front step. His eyes and tongue had been gouged out. And now police in Rio de Janeiro are trying to find who did this and why. One theory is a post on the store’s Facebook page may have angered someone. The post showed surveillance footage and asked for help catching shoplifters. This comes as Brazil readies itself for the World Cup and the Olympics.

Its actually disgusting what happened to joao rodrigo silva santos

Uh, Brazil? Everything gonna be OK for the World Cup and the Olympics and whatnot? http://t.co/yu0yNhJKLj

Join Michaela Pereira for news headlines at throughout the show.

More outrage: Should we add Google and Yahoo to the list of folks mad at the National Security Agency? Seems so, after a Washington Post report that alleged the NSA secretly broke into these companies’ servers to spy. NSA’s chief says the report is not true. It would illegal to do that without a court order, Army Gen. Keith Alexander said.  Despite the denial, Yahoo and Google did not have nice responses. A Google lawyer said the company is “concerned” and “outraged.” Join the club. The NSA has been under fire for weeks now because of leaks of classified documents by former NSA contractor Edward Snowden.

Are allegations that the #NSA snooped on #Yahoo and #Google correct? @jimsciutto has the details: http://t.co/AhASOrST3x

Jim Sciutto will be live throughout the show with the latest. Fran Townsend, CNN National Security Analyst, joins us at 8.

- Scary Halloween dance: Now this guy is pretty scary until he starts dancing.

- What does the porcupine say?: We know you have been pondering this question for some time. This video gives you the answer.

- Jumping for joy: : Did you know there’s a U.S. National jump rope team? Well, there is, and the captain of the team, Tori Boggs, enrolled at Ohio State University. They gave her a scholarship and here’s an amazing video to prove it.

- Kitten kisses: Kitten kisses? That sounds like the title to a terrible song you would never want to hear. But we promise it is a pretty good video. So cute.