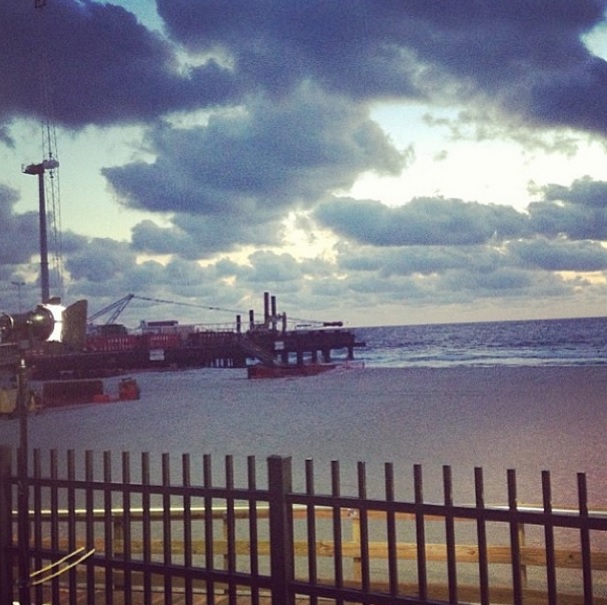 Not everyone is complaining about the hurricane-force winds battering large parts of Europe this week.

Take this group of surfers in Navare', Portugal for example - who on Monday took full advantage of jaw-dropping ocean swells caused by the high wind gusts pummeling the coast there.

These ginormous waves proved no match for these pros though.  Preliminary estimates suggest Brazilian surfer Carlos Burle may have topped the record for biggest wave ever surfed!

A twelve-year-old boy in Canada pleads guilty to a massive hacking attack that took down government websites back in 2012.

The boy had been working under the umbrella of the hacker group "Anonymous," sharing the information he found in exchange for video games.

The boy's lawyer said the 12-year old saw it as a "challenge" and "had no political purpose."

The boardwalk and amusement park in Seaside Heights, New Jersey, were destroyed by on October 31, 2012 and reopened more than six months later to a slow return of tourists and locals.

Vincent Storino, Managing Member of Casino Beach Pier, LLC., says "We had a thousand man hours a day working on this project and what we accomplished in a few months should of taken a few years."

CNN's Deborah Feyerick caught up with the Sullivan family in Breezy Point, Queens, to check their progress as well.

In this community, 75% of the 2,800 homes flooded. 350 were totally destroyed and 135 of those burned to the ground during an epic fire in the midst of the storm.

Billions of federal "build-it-back" dollars are in limbo. New York City is painstakingly vetting applications to make sure the money is well-spent but none of it has gone to build anything back yet on Breezy Point, which is home to many city police & firefighters.

Sullivan says, "You don't know who's getting what, and who's entitled to what and so on but haven't seen anything from the city."

The House Intelligence Committee is set to question U.S. spy chiefs about accusations that the National Security Agency has tapped not only the phone calls of millions of Americans, but those of top U.S. allies.

Among those on the hot seat will be Director of National Intelligence James Clapper, CNN's Jim Sciutto reports.

"If the Americans intercepted cell phones in Germany, they broke German law on German soil," Interior Minister Hans-Peter Friedrich told the Bild am Sonntag newspaper, adding that he wants "complete information on all accusations."

"The confidence in our ally, U.S.A., is shaken," Friedrich said, according to Bild am Sonntag.

CNN's Christiane Amanpour speaks from London to "New Day's" Kate Bolduan to give the international perspective.

Amanpour says most citizens expect surveillance as part of a larger security measure but this feels beyond that need.

“What’s really appalled people over here and in the United States, is the amount of data collection that’s going on against ordinary people.”