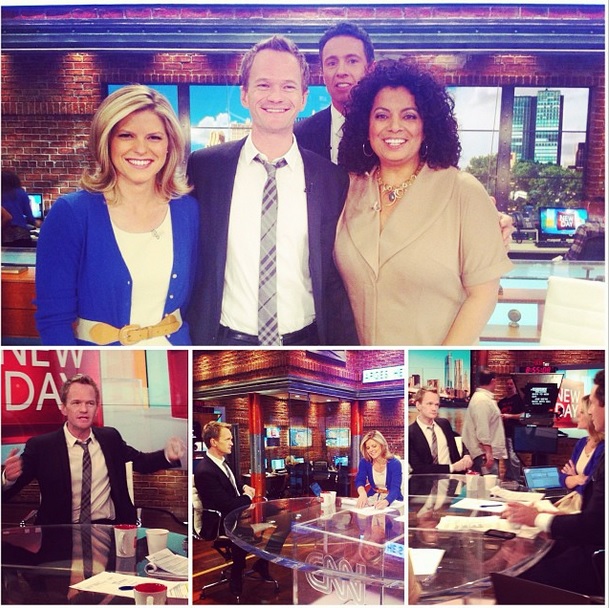 Do you already know what you'll be for Halloween on Thursday?

CNN's Indra Petersons had fun with "New Day's" Chris Cuomo  when she found a picture of him dressed with long hair, sunglasses and a huge mustache on Instagram.

WHY DID CHICKEN CROSS THE ROAD?

"New Day's" Michaela Pereira shared this story of police in Lake Elsinore, California, answering the age-old question - Why did the chicken cross the road?

An officer served as a decoy at a crosswalk dressed in a bright yellow chicken suit while motor officers monitored to catch unsuspecting drivers who did not stop.

In total, 31 drivers were cited for failing to give way to a pedestrian (or a chicken) in a crosswalk.

A locally famous sea lion named Pancho takes an opportunity to steal a fisherman's trophy mahimahi during a photo op!

The family trip to San Diego that we've been discussing, in part to visit SeaWorld with the kids, might be off - indefinitely. I relayed that news to my husband (he wasn't pleased) after watching the stirring documentary "Blackfish."

The film tells the story of the killing in 2010 of experienced SeaWorld trainer Dawn Brancheau by a 12,000-pound orca, CNN's Martin Savidge reports.

You might be surprised to find out that the director of "Blackfish," Gabriela Cowperthwaite, once would routinely take her kids to shows at SeaWorld in San Diego. That was the case until that day nearly four years ago when the whale Brancheau trained and performed with in Orlando pulled her underwater.

The death led Cowperthwaite to make a documentary, raising questions about the safety and humaneness of keeping killer whales in captivity over the past 39 years.

The film includes interviews with a number of former SeaWorld trainers, including one who said he would never take his child to SeaWorld.

"I am not at all interested in having my daughter who is 3-and-a-half grow up thinking that it's normalized to have these intelligent, highly evolved animals in concrete pools," said John Jett, a former SeaWorld trainer, who said he grew increasingly concerned about the stressful conditions the animals were living under at SeaWorld."I don't want her to think that's how we treat the kin that we find ourselves around on this planet. I think it's atrocious.

On Facebook and Twitter,  thousands debate the ethics of keeping killer whales in captivity at aquariums and marine parks.

Many say they were stunned by the movie's allegation that mistreatment of some killer whales also known as orcas may have led to deadly consequences for trainers.

Prosecutors say Martin MacNeill was having an affair when he drugged and drowned his wife, Michele, in 2007. He has pleaded not guilty to her murder.

The defendant barely looked at his daughter while she struggled through her testimony.

Prosecutors argue MacNeill forced his wife to get an unwanted facelift and then filled her with a lethal concoction of prescription drugs. Soon after she died, MacNeill rushed to hire his mistress Gypsy as a nanny. It quickly became clear there was more to the relationship, CNN's Stephanie Elam reports.

HLN's Legal Analyst Joey Jackson weighed in on Monday's "New Day," explaining what the process will be for this week behind MacNeill's youngest daughter Ada, who was just six when her mother died, and her participation in the trial.

Jackson said, "She's so young at the time, so you have to question, did she really see what she saw? However, you have to let her testify, but here's what the judge said. The judge said, 'You are so influenced over the years Ada, by your sister who you're staying with, Alexa Summers, that she in fact has garnered your testimony, she has made your mind and manipulated you in such a way that it's not going to be, not only credible, but it's not even something we can allow the jury to hear. So we'll hear the video tape and allow the defense to question her on that video tape thereafter."