A Missouri prosecutor who dropped charges in a controversial rape case will ask a court to appoint a special prosecutor to review the facts and look at possibly refiling charges.

Nodaway County Prosecuting Attorney Robert L. Rice said Wednesday that he was making the request after CNN aired interviews this week with the alleged victim, Daisy Coleman, who says she was raped when she was 14, and her mother.

At a news conference, Rice also cited a recent article in The Kansas City Star that questioned the integrity of the investigation.

"The public trust in our criminal justice system must be upheld at all times," he said.

Senator Angus King (I-ME), who is on the conference committee to negotiate budget issues, said that there will likely “be some entitlement changes,” including tax considerations and means testing for Medicare recipients. Sen. King told “New Day” Anchor Kate Bolduan that the conference could resolve differences “in a day if people were willing to put their ideological blinders aside.”

Reflecting on the government gridlock and last night’s ninth hour deal, Sen. King said, “I didn’t like that we had to do it and I also didn’t like that it was so short. It’s really three or four months, as you’ve already reported. I just don’t like this business of trying to govern from crisis to crisis…. Everyone’s feeling good this morning, but it’s like the kid who beat his head against the tree and somebody said why are you doing that, he said because it feels so good when I stop. This has been a brutal couple of weeks and pretty much unnecessary.”

On the upcoming fiscal negotiations, Sen. King said, “I think what [Americans] need to be prepared for is some things that everybody’s not going to like…. In order to ameliorate the sequester, there are likely to be some entitlement changes – not cuts in benefits, but things like, for example, right now on Medicare, the tax stops at $100,000 a year. In other words, you pay zero after that as incomes go up. The disparity on that has crept up over the years…. There may be some means testing for wealthier Medicare recipients.”

World markets gave the U.S. debt deal a tepid a tepid reception Thursday, even as lawmakers opened the government for business and removed the threat of a costly default.

Stocks were mixed in Asia, with Japan's Nikkei posting a 0.8% gain and the Australia ASX All Ordinaries ending 0.3% higher.

Hong Kong's Hang Seng and the Shanghai Compositewere both trading in negative territory. They were joined by major markets in London, Frankfurt and Paris, which all started the day in the red.

Even in the U.S., stock futures were little changed after a strong performance on Wednesday.

The 16-day government shutdown took a $24 billion chunk out of the U.S. economy, according to an initial analysis from Standard & Poor's.

As a result, the rating agency projects that the U.S. economy will grow 2.4% in the fourth quarter - as opposed to the roughly 3% growth rate predicted prior to the shutdown. 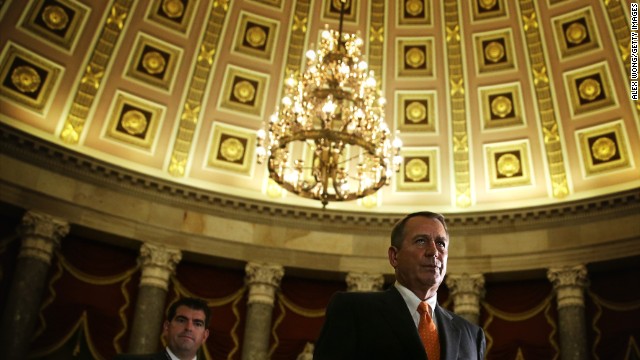 After all the bickering and grandstanding, the billions lost and trust squandered, it was much ado about nothing

The hardline House Republicans, whose opposition to the President's signature healthcare law set this all in motion, got pretty much zip - except maybe their reputations marred.

But it's all temporary - the proverbial kicking of the can.

In a few months, Congress will come back to fight the same battles.

For now, though, thousands of furloughed federal workers will return to work Thursday, the U.S. will pay its bills, and the world's economic superpower can again boast a functioning government.