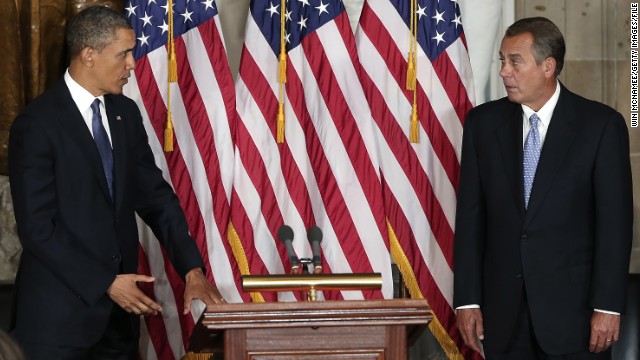 Five Things to Know for Your New Day – Thursday, October 17

The U.S. is hitting restart after a partial shutdown, we discover that Kenya mall terrorists took turns to pray in between shootings, and officials say an airline baggage handler set off dry ice explosions just for fun.

Welcome to the  Thursday edition of “5 Things to Know for Your New Day.” Every weekday morning around 6, we’ll hit the top five stories of the day, clue you in on a few other buzzy items and let you know about the must-watch stories coming up on CNN’s morning show “New Day.”

Time to hit restart: OK, let’s start with the good news. The shutdown is over. The debt ceiling crisis is gone. The bad news: We could be right back there soon. Congress got a deal. But it only funds the government until January 15. So right after New Year's, we could be watching Democrats and the GOP squaring off again.  This  battle dragged on for 16 days and took $24 billion out of the economy. Could it be worse next time? We'll see. But for now, the fight is over. Folks can go back to work today! And so many things we missed will soon come back.  Like the zoo panda cam, and NASA, and paychecks.

Our correspondents will  give us the latest  details and break down what’s  next at 6, 7 and 8.

Relaxed and ruthless:  They chatted on their cell phones while they sprayed bullets at terrified shoppers. They shot at random. And at times, they took breaks from the incessant gunfire to pray. Closed-circuit video obtained by CNN shows a new angle of last month’s Westgate Mall massacre.  Though the video has no sound, the terror on the victims’ faces is loud and clear.  But with more details comes more mystery. Nearly a month after the slayings of 67 people, there are still questions. Chief among them is: What happened to the cold-blooded killers?

We're heading into week 4 & there's still no information on whether or not they've identified the bodies of the #Westgate attackers.

Nima Elbagir will join us from Nairobi  at 6, 7 and 8 to give us more details about this chilling video.

No one's laughing now: Next time you think about exploding dry ice at an airport, don’t. Just don’t.  Not in this era of terrorism. Not in a place with closed-circuit TV. Apparently, a baggage handler at Los Angeles International Airport did not follow this simple logic. He allegedly exploded  the dry ice bombs this week.  His motive? Amusement, police say.  The bombs exploded; nobody laughed. Terminal 2 was closed briefly; he’s facing a long time in prison. The good news is no one was injured.  “This guy was playing around. It was kind of a game to him,” Deputy Police Chief Michael Downing says.

Lewd lunch: Two Georgia teens are in hot water, school officials say, after giving a live show at a school lunch. A female student offered to perform a sex act on a male student right in a crowded cafeteria, officials say. And it allegedly happened as other students formed a wall to block the view of teachers in the lunch room. Teachers heard students talk about it and got all the details.  But no information on the act itself was released, you know, privacy laws and all.  The two teens are facing public indecency charges and we suppose some very angry parents.

5. BULLYING DEATH
Tragedy and questions: The story is shocking and sad. Rebecca Sedwick,12, killed herself last month. Cops say she was bullied and charged two young girls, ages 12 and 14, with aggravated stalking. They made Rebecca’s life a living hell, police say, bullying her at school and online. All because Rebecca once dated an ex-boyfriend of one of the suspects, police say. But now we hear the other side of the story.  The father of one of the suspects will join us at 7. You will be amazed at his explanation.

Dancing in the rain: This might be staged, but who cares? This gas station attendant definitely dances like everyone’s watching.  On top of a customer's car. Makes us want to dance in the rain, too. Or not.

Couch poochtato: After a hard day of napping, getting ear rubs and taking walks, pups get home to no TV programming tailored for them.  Not anymore. DOG TV's got that covered. Subscriptions start at about $10 a month. Maybe we’re in the wrong business?

Rickroll in Klingon:  You’ve not really experienced Rick Astley’s music until you’ve heard it in "Star Trek" language.  Someone out there translated his famous song, “Never Gonna Give You Up” into Klingon. Just think a karaoke version of the song performed by people in costume. And did we mention it has subtitles? Click if you dare.