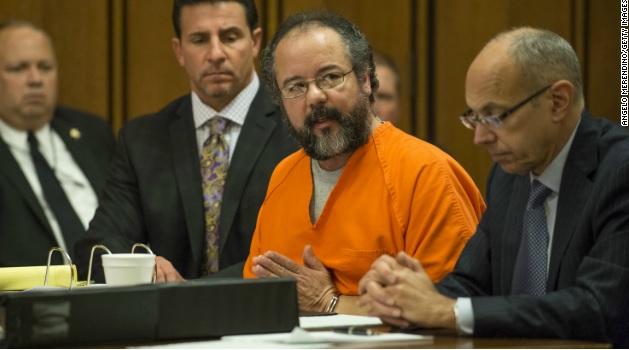 5 Things to Know for Your New Day – Friday, October 11

No deal yet on the government shutdown, some strange stuff went on when Ariel Castro died, and the Nobel Peace Prize results are out.

It's Friday, and here are the “5 Things to Know for Your New Day."
Every weekday morning around 6, we’ll hit the top five stories of the day, clue you in on a few other buzzy items and let you know about some of the must-watch stories coming up on CNN’s morning show, “New Day.”

Deal or no deal? That’s the question as the partial government shutdown enters its 11th day. The good news is President Obama and House Republicans are now talking. They've been bitterly divided along party lines for weeks, routinely throwing barbs but rarely trading proposals. The other good news is House Republicans offered a plan to temporarily halt a U.S. debt default. The president listened.  Both sides agreed to keep on talking. But just because they’re talking doesn’t mean there’s a deal on the debt ceiling, yet. And today, they’ll keep talking.
Meanwhile, outraged citizens are getting more creative. A new website urges furloughed employees to pass time by drunk-dialing Congress to express dismay about the shutdown.

"Things that will happen before the #GovernmentShutdown ends. 1. Jesus will return 2. Tupac will return 3. Giants will win a game" 😂

Fed up with Capitol Hill? Call and yell at a random Member of Congress. http://t.co/ykhmhON9bp #DontShutMeDown

Christine Romans, Brianna Keilar and Candy Crowley will be live at 6, 7 and 8 with more details.

And the winner is … :   With the announcement,  the global spotlight is back on the Syrian conflict.  The Nobel Peace Prize committee awarded it to the Organisation for the Prohibition of Chemical Weapons, an international watchdog helping eliminate Syria's stockpiles.  The Nobel committee said the award was for the agency's longstanding efforts, and not for work in Syria, but it highlights the risks involved in disarming the nation. Of the hundreds of nominees for the award, Malala Yousafzai was getting the most buzz.  She stood up for education, and got shot in the head by the Taliban a year ago.  Her wounds were near fatal, but she survived.  The militants thought they silenced her, but they amplified her voice worldwide.

Christiane Amanpour joins us at 6 to tell us more about her wide-ranging interview with Malala. Erin McLaughlin will be live at 6 with more details after the Nobel announcement.

Jailhouse schlock: As if Ariel Castro’s heinous crimes weren't strange enough. Now that he is dead, it seems his suicide may mean trouble for the prison guards in charge of him. They could even get fired. Ohio’s corrections department has started a probe into the death of the man convicted of raping three girls for about a decade. And two guards may not have done their jobs right quite right. They were allegedly tardy on their rounds to check on prisoners and may have fudged their log books. The probe also put out a sensational allegation that Castro’s may not have hanged himself but instead had an accident. The corrections department report submitted some information that might indicate "the possibility of auto-erotic asphyxiation." Paula Gorniak, the coroner who did Castro’s autopsy, knocked that one down hard: “It was suicide.” She said that anyone making other claims was “outside of their lane.”

Pamela Brown is live at 6 and 7 with the latest.

More questions:  Could surveillance video answer the questions many are asking about the suspicious death? Kendrick Johnson family attorneys think so. The teen was found dead in a rolled-up gym mat at a southern Georgia high school in January.  Authorities say he was suffocated in the mat while looking for a sneaker. His family says he was murdered. And they believe the surveillance video, now being withheld, will tell the true story. “There is one eyewitness that we know is available,” attorney Chevene B. King Jr. said yesterday. “For some unknown reason, this tape has been withheld.” The teen's relatives are not the only ones searching for answers. Federal authorities are looking into the case, too.

On a completely different note, if something doesn't quite feel right to you about the death of Kendrick Johnson, raise your hand...

To Russia, with love: The former U.S. spy agency contractor may have a guest soon. His dad, Lon Snowden, is in Russia, proclaiming his love and hoping for a reunion.  He also says his son should win the Nobel Peace Prize. The U.S. doesn't share his sentiment. It calls Edward Snowden a fugitive and wants to have a talk with him about leaking U.S. spy program details to the media. But the younger Snowden is in a secret location and has been under the radar since he fled to Russia in June.  But he reappeared briefly to receive an award from former intelligence leakers.

Nic Robertson and Phil Black will bring us the latest from Moscow.

Animal attraction: Remember when dad would come home from work and you’d run to the door to greet him?  Yeah, elephants do that too.  We’re not sure what’s going on here – we don’t speak elephantelese – but they sure seem happy to see each other. And it’s like the rule of the Internet: Animals doing almost anything is cute.

Catzillas: And continuing our animal-themed buzzies this morning, take a look at this website , which mixes brides and cats in a oh so playful way. Forget boring old bouquets, just Photoshop a few pictures and voila, bridesthrowingcats.com. Spoiler alert: No real kitties were harmed in the making of this meme.

The latest internet craze.. Bouquets are SO yesterday: http://t.co/KWQxhQwFbA pic.twitter.com/y54J2JPKk3

Gooey breakfast: There’s Grape-Nuts, and there’s cat vomit. And one TV anchor mistook one for the other.   Scot Haney, a Connecticut weatherman, thought he spotted some leftover breakfast on the floor while filming the evening news. He dug in, live on camera.  Only to come back later and say it was cat vomit.  No word on why he decided to eat food from the floor. But his video has gone viral, with collective chuckles worldwide.

I thought they were grape nuts on the floor, i ate them. It was actually cat vomit that i must have stepped in at home. It came off my shoe