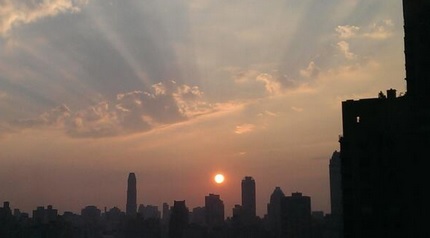 Authorities say they've identified and are closer to finding one of the main bikers that played a role in the beating of a New York SUV driver, an act that was captured on tape and sparked national outrage, CNN's Susan Candiotti reports.

The biker being sought is suspected of bashing in the SUV driver's window, a law enforcement official with knowledge of the investigation told CNN late Thursday.

The suspect was not in custody but may soon be, the official said.

The incident took place on Manhattan's West Side Highway on Sunday. Police said a man driving a Range Rover struck a motorcyclist who had slowed.

For a man with a message, his every move is full of symbolism and Pope Francis' pastoral visit to the hilltop Italian town of Assisi Friday is indeed long on meaning. CNN's Ben Wedeman reports.

It's the birthplace of Saint Francis, who some eight hundred years ago abandoned a life of wealth and privilege to serve the poor.

Since becoming pope, Francis has turned his back on the trappings of power, choosing to live in the modest Vatican residence, the Casa Santa Marta, and preferring to use a second hand car to drive around the Vatican.

He has stressed repeatedly he wants the Church to be a poor church serving the poor and in a recent interview published in an Italian newspaper, Francis condemned church leaders as narcistic and vain.

This week he held three days of closed door meetings with eight cardinals where they discussed ways to reform the church, its finances and its bureaucracy.

Some observers suggest Pope Francis may be more of a revolutionary than a reformer.

Reid to CNN: Boehner’s ‘Job Is Not As Important As Our Country’

In an interview with CNN Chief Congressional Correspondent Dana Bash, Senate Majority Leader Harry Reid accused House Speaker John Boehner of being more worried about his job than the country amid a government shutdown.

The Nevada Democrat also talked for the first time Thursday about Boehner reneging on an agreement between the two over a “clean” spending bill, and admitted he directed his chief of staff to  leak embarrassing e-mails that they say indicate Boehner changed his position on Obamacare subsidies for Congress.

Reid also followed up on his controversial comments from Wednesday, when he took issue with the idea that the Senate should vote to fund clinical trials for cancer patients at the National Institutes of Health during the shutdown.

In the interview, Reid criticized Boehner for bowing to a conservative faction of his caucus that insists on attaching anti-Obamacare provisions to a temporary spending bill needed to fund the government.

“His job is not as important as our country,” Reid said.