Russian President Vladimir Putin criticizes the U.S. policy on Syria and President Obama in an open letter in the 'New York Times.'

This action has some doubting Putin's commitment to bring a diplomatic solution to the country. CNN's Brianna Keilar reports.

President Putin suggests the U.S. is being duped by the rebels and that Bashar al-Assad may not be responsible for recent chemical attacks.

He writes: "There is every reason to believe it was used not by the Syrian army, but by opposition forces, to provoke intervention by their powerful foreign patrons."

This comes as France says the United Nations will probably publish its report on the August chemical attack in Damascus on Monday.  The country says there will be indications in the report the Assad regime was behind the attack.

After hearing about the letter at a meal, Democratic Senator Robert Menendez, chairman of the Foreign Relations Committee, told CNN's Jake Tapper, he felt sick.

"I almost wanted to vomit," said Menendez. "I worry when someone who came up through the KGB tells us what is in our national interests, and what is not. It really raises the question of how serious the Russian proposal is."

Though CNN's Chief International Correspondent Christiane Amanpour weighs in on the letter and suggests to separate the message from the messenger.

Amanpour notes that Putin puts himself squarely behind owning this diplomatic initiative and that is a good thing for President Obama. In the long- run, it shows that he's trying every possible solution besides military action first.

Though Amanpour agrees where Putin goes astray is when he makes assertions about the Syrian rebels.

She says, "I think where Putin goes off on these crazy tangents, is when he writes in the 'New York Times' that he thinks that the rebels have used these chemical weapons and not only that, that they’re planning another chemical weapons attack against Israel.I mean this kind of stuff is not based in any kind of evidence that we’ve ever seen them produce."

Putin has emerged as a sort of peacemaker in these negotiations and the Obama administration has cautiously backed his proposal for Syria to surrender their chemical weapon stockpiles to international control.

Twelve-year-old Kali Hardig is only the third person to survive a rare infection caused by brain-eating amoebas.

After battling parasitic meningitis, Hardig has left the hospital and will start school part-time next week.

Kali says it is “awesome to be home” and that she is feeling “good.”

She adds the first thing she wants to do when she gets to her house is play with her dog Chloe.

At the end of the interview, she also thanks people for praying for her.

CNN's Senior Medical Correspondent Elizabeth Cohen says doctors at Arkansas Children's Hospital had to put Hardig in a coma to try and save her life. After nearly seven weeks under medical care, and with the help of an experimental anti-amoeba drug doctors had to get from the Centers for Disease Control, the girl made it through.

Five Things to Know for Your New Day – Thursday, September 12

The U.S. is talking peace and arming rebels, Putin takes a dig at Obama, and strippers win in New York City.

It's Thursday and here are the “5 Things to Know for Your New Day."
Every weekday morning around 6, we’ll hit the top five stories of the day, clue you in on a few other buzzy items, and let you know about some of the must-watch stories coming up on CNN’s morning show, “New Day.”

You say you want a resolution: Well, you know, we all want to change the world. The question is: Can Secretary of State John Kerry and his Russian counterpart come to an agreement when they meet in Geneva, beginning today? The U.S. isn’t leaving anything to chance, though. While it pursues diplomacy, it’s also started arming the rebels. (The rebels, however, say they haven’t seen the weapons yet).

Meanwhile, a Vladimir Putin-penned piece in The New York Times has at least one White House official saying it's an indication the Russian president is "now fully invested in Syria's chemical disarmament." And a U.N. report says both sides - the regime and the rebels - have committed war crimes in Syria’s bloody civil war.

Too much going on? No worries. We’ll make it easy for you. Here are the five things to pay attention to today.

Brianna Keilar will be live at 6, 7, and 8 to give us the latest on the U.S. involvement with Syria.

From Russia, with(out) love: He could have just said why the U.S. shouldn’t bomb Syria. Did he really have to lay the smackdown? In his New York Times opinion piece, Russian President Vladimir Putin says the U.S. isn’t the exceptional country Obama claims it to be.

"We are all different, but when we ask for the Lord’s blessings, we must not forget that God created us equal."

Not exceptional? Red-blooded Americans took exception. Democratic Sen. Robert Menendez said the piece made him almost want to throw up. And the Internet responded with variations on "Oh no, he didn't!"

Hey Putin, next time you wanna write a letter to convince America about something, how about you skip saying we're not exceptional? #rude

In his open letter Putin says "God created us all equal" – guess he forgot about the gays & his discriminatory laws. http://t.co/mgXIG6YWWX

We’ll have a team of correspondents live at 6, 7, and 8 to tell us what Putin’s plea for peace really means.

I'm a survivor, I'm not goin' give up: By nearly all accounts, 12-year-old Kali Hardig shouldn’t be alive. During a swim at a water park in July, she contracted a rare infection caused by a brain-eating amoeba. In the last 50 years, only two people have survived. But Kali’s a fighter, and against all odds, she made it. After two months in the hospital, part of which she spent in a coma, she went home yesterday. And she’ll reach another milestone on Monday: She’ll be back in school. So that’s miracle girl: 1; nasty amoeba: 0. Cue Destiny’s Child, y’all.

This is for Kali Hardig, an amazing girl in Little Rock battling a brain-eating disease #KartwheelsForKali pic.twitter.com/kX4RKbnypz

Reading about Kali Hardig gives me chills. Thanks to her constant battle against the amoeba, they are that much close to finding a cure!!

We’ll have more on Kali Hardig’s amazing story and an exclusive interview with Kali and her mother at 8:45 a.m.

Ready, aim, fired: Who knew you could lose your job for wanting tighter gun control? That’s what happened to two Colorado state senators who wanted universal background checks and a limit on magazines. They got the boot yesterday in an NRA-funded recall election.

Missourians saw the tide turn the other way. Lawmakers there tried to pass legislation that would say federal gun laws won’t apply in their state. It passed the House, but fell short by one vote in the Senate yesterday. Had it passed, the law would have let Missourians own machine guns. That’s banned under federal law. And if the feds came to take the guns away? The would-be law would OK the agents’ arrests! 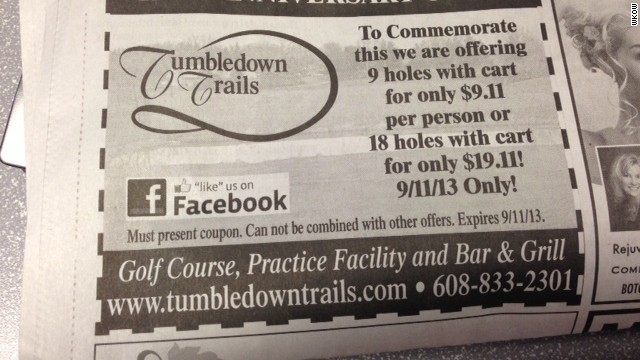 A Marriott hotel got a Twitter-lashing when it offered “complimentary coffee and mini muffins from 8:45 – 9:15 am” – roughly the same times when two planes crashed into the World Trade Center towers.

Not sure if this is mildly insulting or extremely insulting “@eclectrica: What pic.twitter.com/w8Xn8kLSlj”

We are aware of the picture shared of an offer at one of our hotels, and we sincerely apologize for any perceived insensitivity.

And AT&T’s tweet showing a smartphone and a 9/11 memorial didn’t last long online before Twitter users replied with expletives or threatened to switch carriers.
Hey geniuses, next time you come up with another bonehead idea, pause and pull out this flow chart:

For AT&T, that golf course, and others, here is my FREE 'Should I make a 9/11 ad?' flowchart: pic.twitter.com/8zt6AvzCrw

- Call me maybe?: Worried about withdrawal when Breaking Bad ends this season? AMC’s got your back with a new series called “Better Caul Saul,” featuring the show’s shady criminal lawyer.
https://twitter.com/FutileRage/status/378069982732492800

- Minimum wage for minimum clothes: A judge has ruled that strippers at a Manhattan club are hourly employees – and therefore deserve to be paid minimum wage. Dancers had to pay the club a nightly "house fee," and at least $20 of their tips. What, no perks for twerks?

- I want my baby back, baby back, baby (bear) back: Robert Baysinger can’t bear to go a day without his girl, Savannah. The problem is, Savannah’s a black bear. He rescued her, he raised her, he clad her in diapers. And then the Man came and took her away.