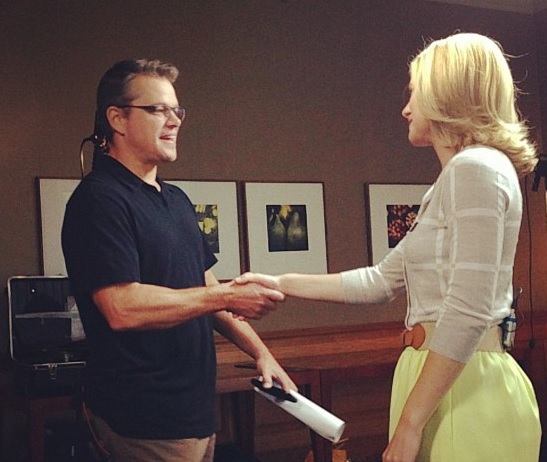 Things we know about Matt Damon: He is a superstar with a mega-watt smile and huge hit movies under hit belt.

Forbes Magazine even called him the most dependable star in Hollywood, bringing studios an estimated $29 of profit for every dollar he gets paid.

But this year, Damon is shaking things up and taking some big chances, like with his latest film "Elysium."

"You've done action before in the Bourne films that everyone knows obviously, but what drew you to this film?" asks Anchor Kate Bolduan.

"It was the director, Neill Blomkamp, is the same guy who directed 'District 9' and I just loved that movie," says Damon.

Blomkamp grabbed attention when his low-budget $30 million alien movie went on to gross $211 million worldwide and snag 4 Oscar nominations. Damon hopes his gamble on another Blomkamp sci-fi flick will pay off as well.

Set in the year 2154, Damon's latest role has him fighting his way from a ruined wastelan planet Earth, to the man-made paradise called Elysium

"What was it like? I'm always curious and – bc it becomes part of the job, to have the getting in shape for it," asks Bolduan.

"Definitely, definitely. Bc it's not something that I particularly enjoy. The diet part is not something I enjoy. But Neill had a whole kind of graphic novel that he'd put together on his computer, like a whole thing," says Damon. "And there was a picture of Max with his shirt off, staring into a mirror, with tattoos all over, in really good shape... You know, they hired this unbelievable trainer. I went to the guy with the picture and went, I need to do this. And he kind of looked at me, and went OK."

For a guy with such star power, Damon also possesses an unusual quality for a Hollywood A-lister. He is still very much just a normal guy.

"Isn't that such a statement that's a shock and a compliment that someone actually calls you normal in terms of how celebrities are these days... How do you stay so normal?" asks Bolduan.

"Well my favorite answer to that that I ever heard was, someone asked George Clooney, and he said, "oh, I pay a whole team of people to do that," says Damon.

Should School Bus Drivers Step In to Stop a fight?

The video of a shocking school bus beating video out of Florida is now raising questions of school bus safety.

Many were enraged the driver didn't step in and stop it. But neither he nor many other school bus drivers across the nation are required to do so.

The driver behind the wheel in this case was 64-year-old John Moody, who looked on in horror, and radioed for help.

No nationwide policy exists on how to deal with school bus violence. Every school district has its own.

“Pinellas County school policy gives drivers the choice of whether they should physically intervene,” Brown reports.

Ken Trump, President of the National School Safety & Security Services, says, “The driver has to take the totality of the circumstances into consideration.”

According to Trump, the driver must consider whether he puts other children at risk by leaving the front of the bus.

"The school bus is an extension of the school and the same discipline applies,” Trump says.

“I think that the kids believe it's harder to get caught. And when they do do something, it's harder for one adult to intervene."

The other players were only banned for 50 games.

Long in the spotlight as a larger-than-life-figure—both on and off and the field, A-Rod has taken a dramatic fall from grace for a player once thought to be the best in the game.

“He made his major league debut at 18,” CNN's Nischelle Turner reports.

“Blockbuster stats followed, landing him the most lucrative contract in MLB history, a $252 million dollar deal with the Texas Rangers.”

Ben Reiter of Sports Illustrated says, "Money was important to him and all the trappings that money could bring."

“In 2003, he was traded to baseball's most celebrated franchise, the New York Yankees,” Turner says.

Square in the center of the media spotlight, he even graced the cover of fashion magazines.

"He's seen back then to be kind of a golden boy. In the years to follow he took advantage of everything the city has to offer," Reiter says.

After all, money was no object. In 2007, the slugger signed another monster contract for $275 million dollars.

“But it was A-Rod's off-field activities that landed him in the tabloids,” Turner reports. “His wife Cynthia filed for divorce in 2008, citing Rodriguez's extra-marital affairs.”

“Alex Rodriguez' divorce from his wife Cynthia was really one of the first cracks in this golden boy façade,” Reiter says.