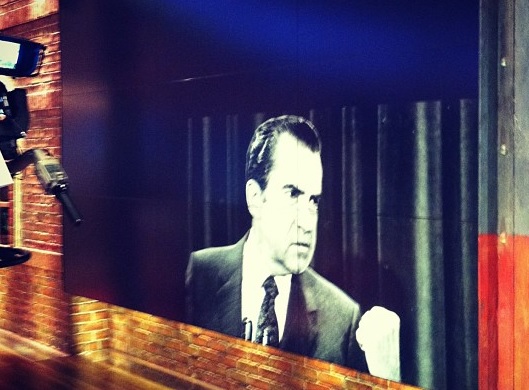 During today's show, news broke that NSA Leaker Edward Snowden received approval for temporary asylum in Russian. Dan Rather was able to weigh in. Watch video above

In addition, viewers will be getting a new glimpse into the Nixon administration on CNN in a new documentary called "Our Nixon," featuring footage taken by top Nixon aides, tonight at 9:00 pm ET on CNN.

Rather also discussed what it was like covering the Nixon administration as a journalist. Watch video below:

New Video Shows Dolphin Out of Water at SeaWorld

SeaWorld is already taking heat for a video that showed a pilot whale stranded outside its tank in Orlando, Florida while visitors screamed for help.

Now another video has surfaced of a dolphin stranded on the concrete after jumping out of its enclosure at the SeaWorld in San Antonio, Texas.

The footage was newly released by the People for the Ethical Treatment of Animals.

According to PETA, the dolphin was bloodied and flailed there unhelped for minutes.

“But a spokesperson for the theme park said this video is misleading and was shot more than a year ago.”

SeaWorld also said, “The dolphin involved is healthy and doing fine today…Our zoological staff moved quickly to assist the dolphin. She was examined by our staff veterinarian and she was back in the water in less than 30 minutes.”

“The video is just the latest in a rising wave of bad publicity that first hit the theme park last month with the release of the documentary "Blackfish,” Turner says.

CNN Films has purchased the TV rights for Blackfish and it will air it on October 24.

The host of the 2014 Winter Olympics, Russia just announced that not all may be welcomed at the games.

“It bans the public discussion of gay rights and relationships anywhere children might hear it.”

Now there is great concern over what the law could mean for gay athletes and fans visiting Russia for the games.

The politician responsible for driving the law told parliament, “it outlaws spreading information that gives a distorted perception of social equality between traditional and nontraditional sexual relations,” Black reports.

“The International Olympic Committee says it’s been assured by the government this law won't be applied during the games, but not every official supports that.”

One says that “all Russian laws should be enforced during the Olympics regardless of who is breaking them,” fueling the growing outrage across the world over the law.

Grateful for the international support, Russian gay activists say their goal is to kill off this law before the Olympics.

“If that doesn't work," Black reports, "they want to use the international focus on Russia during the games to apply maximum pressure on the Russian government.”