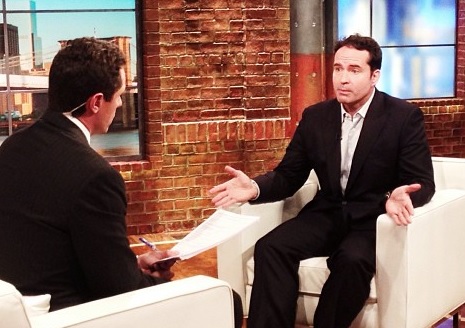 Actor Jason Patric is notoriously press shy, but the 47-year-old is in a difficult custody battle with a former girlfriend. He wants to help raise the child he fathered by in-vitro fertilization. But, the baby's mother wants him out of the picture.

Calling a father just a sperm donor is an insult, but it may also be the legal fate of certain unmarried dads, and Patric says he is one of them.

Patric, known for roles in "The Lost Boys" and "Speed 2" is now in a heated dispute with his ex-girlfriend, Danielle Schreiber over their son 3-year-old Gus. (Watch above video)

He says they tried for years to have a child and Gus was eventually born through in-vitro fertilization using Patric's sperm.

Despite scores of photos and home videos showing them as a happy family, Schreiber now says she never intended Patric to be more than a sperm donor.

As proof, Schrieber has a letter Patric wrote saying he wasn't ready to be a father, and she says he asked to be left off the birth certificate.

For his part, Patric points to a stack of documents listing him as father and showing financial support… and those photos – all of which, he says, show that he is Gus' dad.

But, under current California state law, a man whose sperm is used by a fertility clinic, must have a signed agreement in writing clearly stating plans to co-parent, otherwise, he does not have parental rights.

California State Senator Jerry Hill who wrote the original law- is now leading the charge to amend it to allow for a donor who says he intended to be a father, but had no signed agreement – the opportunity to gain parental rights…

Patric says there will be others like him, but his immediate concern is for little Gus, whom he says needs his father.

In a "New Day" exclusive, Patric opens up to Anchor Chris Cuomo in an emotional interview.

"I never had a child before, it's a first child and I think that like any who has had a first child, you get very overprotective..." he says. Watch:

They go on to discuss the law that protects women from sperm donors so that they don't try and get involved in a life they waived their rights to. This law however, can catch up unmarried men who don't have a contract for being a parent. Watch:

"What is it like not having him in your life?" asks Cuomo.

A University of Pittsburgh research professor faces an extradition hearing in West Virginia later today. Robert Ferrante is wanted on homicide charges in Pennsylvania for allegedly killing his wife with a lethal dose of cyanide back in April.

Ferrante is expected to waive extradition and be transported back to Pennsylvania. His arrest in West Virginia on Thursday ended a nation-wide manhunt.

He is accused of poisoning his wife, Dr. Autumn Klein, chief of women's neurology at the University of Pittsburgh Medical Center.

Police investigators scoured both the couple's home and at the university lab where Ferrante worked collecting evidence.

A 3-month investigation led to a criminal complaint against the 64-year-old Ferrante comprised of an alleged text conversation with his wife, urging her to go on a creatine regiment to help with fertility – the same substance investigators believe he laced with cyanide. The complaint also documents Ferrante placing an order for an "overnight delivery of cyanide" 2 days before his wife collapsed.

CNN legal analyst Paul Callan weighs in on the situation.

"There are no slam dunks in circumstantial evidence homicide cases," he says. "So I think he's going to put up 2 possible approaches here. One, he had a legitimate reason to have cyanide, he's a brilliant university researcher... the second issue that has been raised is suicide by her, but I'm telling you, that one's a rough one." Watch:

A fun filled day at SeaWorld turned into a disturbing scene for many patrons when a young pilot whale floundered helplessly for nearly a half an hour despite pleas from the crowd for an employee to help.

“According to a SeaWorld spokeswoman, pilot whales come out on the ledge all the time, usually getting back in to the pool by themselves. It's the younger ones like the one in this video that they say haven't quite mastered the technique.”

SeaWorld released this statement to CNN saying, “I want to reassure you, the whale was never in danger. The safety and health of the animals in our care are among our highest priorities.”

But the video posted to YouTube comes right after the release of a new documentary that criticizes the practices at SeaWorld.

SeaWorld responded to Blackfish in this statement to CNN: “…the film fails to mention SeaWorld's commitment to the safety of its team members and guests and to the care and welfare of its animals…"

Former SeaWorld trainer John Hargrove, who took part in the film, is also critical of the park's practices. But he says “physically, the animal is not in danger in that scenario.” (WATCH VIDEO)

He says they can stay slid out for hours at a time.

“However, with that being said, the animal is definitely in distress,” Hargrove says. “And because of that, the trainers should make every move they can to get that animal back into the water as quick as fast as they can.”

"Blackfish" airs on CNN in the fall.