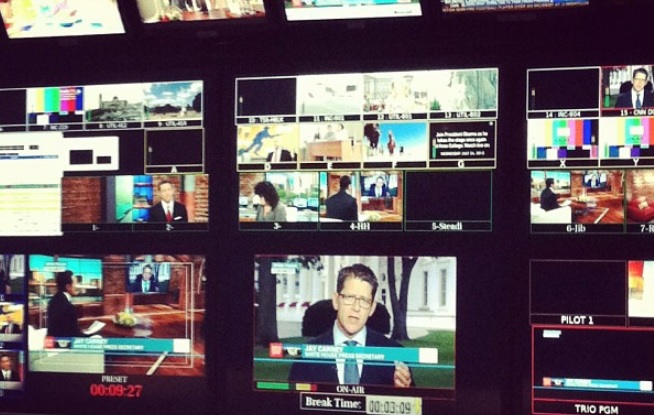 Investigating Cause of Southwest Accident

The flight data and cockpit voice recorders of Southwest Airlines Flight 345 that crashed at LaGuardia airport on Monday are in the hands of federal investigators in Washington, DC today. There was no loss of life in the crash, but the damage was extensive, CNN's Rene Marsh reports.

The landing gear collapsed upward into the fuselage, damaging the electronics bay, which houses avionics and other equipment. Southwest says the Boeing 737 was inspected just last week. The airline added that it is working with both the NTSB and Boeing in a preliminary investigation.

150 people were on board the Boeing 737, nine of whom suffered non life threatening injuries.

This isn't the first time Southwest airlines has had problems with landing gear. In June 2007, a Southwest Boeing 737 had a nose-gear collapse in Oakland, California. No one was hurt.

Who is Huma Abedin?

In the annals of political wives standing by their men, Huma Abedin speaking out in support of her husband Anthony Weiner, was unprecedented.

"Anthony has made some horrible mistakes," Abedin says in the above video, "...both before he resigned from congress and after, but I strongly believe that's between us and our marriage."

Admitting her husband continued sexting with other women at least a year after publicly humiliating her doing the same thing, while she was pregnant. Yet telling New Yorkers she forgave him, so they should too.

"I love him , I have forgiven him, I believe in him, and as we've said from the beginning, we are moving forward," she says.

Royal Baby at Home with the Family

The first look at the royal baby Tuesday–as Prince William and Duchess Catherine left the hospital with their newborn son, felt familiar to many royal enthusiasts.

It was like a flashback to the scene outside the Lindo Wing of St. Mary’s Hospital 31 years ago when Princess Diana and Prince Charles introduced baby Prince William to the world.

And ever in the spotlight for her fashion choices much like her late mother-in-law, “many saw the pale blue polka dot dress worn by the Duchess of Cambridge as a touching tribute to Diana who also wore polka dots when she left the hospital with her first born son,” reports “New Day” anchor Kate Bolduan.

There was a switch in the royal handoff, however.

“When Prince Charles and Princess Diana first came out, Charles carried the future king, before placing the baby gently into his wife's arms,” Bolduan says. “This time Catherine took the lead, emerging with the baby before handing him over to first time dad, William.”

The royal poster couple for a modern world, William and Kate altered their exit strategy too.

“Charles had a chauffeur car driving off with Diana holding the baby,” Bolduan says. “This modern day dad looked like many new fathers—smoothly clicking the baby's car seat into his Range Rover that he drove off.”

After the new parents gave the world a glimpse of their little prince, it was high time for him to meet the rest of his royal relatives.

And that includes aunt Pippa and uncle Harry. Both big headline makers, many wonder what kind of aunt and uncle the two of them will make.

“Harry will clearly be protective,” CNN’s Max Foster says, “but is also expected to be the fun uncle.” (WATCH VIDEO)

"He's just a giant kid himself,” says Royal blogger Susan Hewitt. “So I think he's gonna be that kinda hands-on uncle and father that kids just naturally are drawn to."

Many expect the same involvement from aunt Pippa, who they picture helping her sister Kate take care of the new heir.

"She'll definitely plan the baby's first birthday party, probably the Christening, and it'll be a better party than anybody has ever seen,”  says Royal blogger Kelly Harrison.

“I think she'll really just be by Kate's side and be supportive to Kate. I can picture the two of them out shopping in London and Pippa standing in front of the stroller or rolling the stroller along."

Foster reports that Harry and Pippa have both met their nephew by now and Baby Cambridge finally met the queen today as well.

“Just a couple of days old, but actually this little baby has met all those crucial members of the family.”