This past weekend, and one week after the acquittal of George Zimmerman, thousands took to the streets to voice their opinions. Some defended Zimmerman, while others protested the "not guilty" verdict, calling for change.

Their voices were met by politicians on both sides, including an emotional speech from President Obama, CNN's Brianna Keiler reports.

In Houston late Sunday, there were some tense moments as Trayvon Martin supporters marched close by a group backing George Zimmerman, and 'Stand Your Ground' laws, shouting "No justice– no peace."

Earlier there were emotional rallies in some 100 cities across the country echoing President Obama's personal comments trying to explain the pain African-Americans are feeling. "....Trayvon Martin could have been me 35 years ago," he says from the White House briefing room.

Protesters are demanding federal civil rights changes, and are supporting the President's call for states to reconsider 'Stand Your Ground' laws.

"... If Trayvon Martin was of age and armed, could he have stood his ground on that sidewalk?" asks President Obama. "And do we actually think that he would have been justified in shooting Mr. Zimmerman who had followed him in a car because he left threatened?"

Trayvon Martin's father, Tracy, told CNN: "We admire the president for stepping up and doing that because it sends a message to the world that this could have been anybody's child." 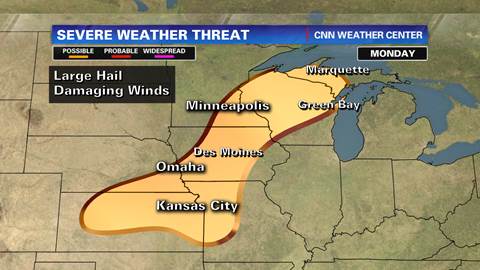 Storms in the east

Monsoon in the Southwest

Out with its head!: So it looks like the royal bambino is on its way – finally. The Duchess of Cambridge has gone to the hospital and millions of people have woken up their husbands, wives, neighbors, guy in the apartment two floors up. Altogether now, puuuuuuuuuuuush, puuuuuuuuuuuuuuush. And people, don’t forget to breathe every once in a while.

Max Foster is outside the hospital in London where we’re waiting for the official word on the birth.

Seat came back empty: An amusement park safety expert says the safety restraint on a roller coaster needs to fit snugly near your waist, just above your thighs. Before she took off on the Texas Giant, Rosy Esparza was worried her lap bar wasn’t secure, witnesses said. Esparza died after she fell from the roller coaster at Six Flags Over Texas. As her family members grieve, they also wonder how the accident happened.

Ed Lavandera will have more on the story each hour.

Mud, muck and a murky mess: It took just a half hour for the streets in the Tucson, Arizona, area to become dangerous rivers of fast-moving water. For firefighters, it was one rescue after another, after another. While it looks like residents there will dry out this week, folks in the Northeast might not be so lucky.

Meteorologist Indra Petersons is with us all morning and will explain what’s in the forecast.

Copycat crime?: "Unfortunately, this is a sick individual who appears to have been influenced by another sick individual," the mayor of East Cleveland, Ohio, tells CNN. He’s talking about a 35-year-old suspect who police have arrested in connection with the killings of three women. Their bodies were found wrapped in plastic, one in a garage leased by Michael Madison, who has yet to be charged with any of the deaths. And apparently some other women were able to get away from this suspect, who the mayor says idolized convicted serial killer Anthony Sowell.

Criminologist Casey Jordan joins us at 7.

Marching for change: Over the weekend, in more than 100 cities, thousands of people gathered to protest the verdict in the George Zimmerman trial and Florida’s Stand Your Ground defense law. That included celebrities like Jay Z and Beyonce. They stood beside Martin’s mother, Sybrina Fulton, who said her heart was healing, but there was still work ahead.

I would like to personally thank EVERYONE who attended the Trayvon Martin marches and rallies throughout the (cont) http://t.co/pr3xyzPuOU

Our guests at 8 are the Rev. Jesse Lee Peterson and CNN contributor Charles Blow.

–Show of support: More than 33,000 people have liked a Facebook page created to amplify support for Massachusetts State Police officer Sgt. Sean Murphy. He was the man who, angered by the Rolling Stone cover of Dzhokhar Tsarnaev, released other photos of the Boston bombing suspect.

–Trying to unsee that: Geraldo Rivera caused quite a stir Sunday morning after he posted a topless of himself on Twitter with the caption "70 is the new 50." Later Sunday the Fox personality posted, "Note to self: no tweeting after 1am." He deleted the photo. Which of course NO ONE had saved. We’ll spare you, however.

warning, i am gunna continue posting the Geraldo photo until someone delivers me a box of chocolate covered kittens https://t.co/eZEtPmHkK2

–He could have been toast: The founder of Digg posted a YouTube video this weekend showing him tossing a large raccoon down a flight of stairs after it attacked his dog, Toaster. The video has been viewed more than 1.3 million times and has more than 15,000 comments, not all positive. Personally we don't think anything is wrong with the name Toaster...

- Maybe they should sell candy bars instead: So some supporters of secrets spiller Edward Snowden are using Indiegogo to raise money for his travel costs. You know, when we were raising money for trips with our sports teams we used to sell donuts or chocolate bars, but these days people hop on the internet and just ask for cash. So far they’ve raised a little over $500 out of their $200,000 goal, with nine days to go. There’s still time to order the candy, just sayin’.

- Well, he barked first: A Florida Gators player is in trouble for supposedly harassing a police officer. A K-9 officer. Antonio Morrison’s defense? He barked at me first, a police report says. Oh, Georgia fans, you're on.

There you go. All you need to know to get an early start to your morning.
Be sure to tune in to "New Day," from 6 to 9 a.m. ET, join us at CNN.com/NewDay and go and have a GREAT NEW DAY