"Around the World" Today: Syria, Turkey, and Paris

CNN's Kate Bolduan takes a quick look at international stories today and shares updates on the fighting in Syria, protests in Turkey, and the Paris Air Show.

Two California boys, ages 16 and 17, were stranded in a terrifying situation atop a windy cliff in California. California Highway Patrol had to make several attempts via aircraft to rescue the boys. CNN's Miguel Marquez Reports with footage of the incredible rescue. 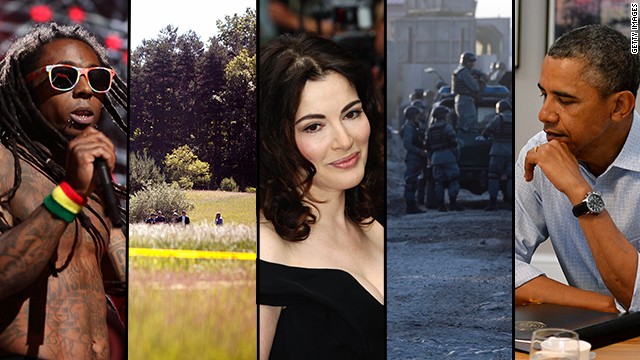 5 Things to Know for Your New Day

Every weekday morning around 6, we’ll hit the top five stories of the day, clue you in on a few other buzzy items, and let you know about some of the must-watch stories coming up on CNN’s new morning show, “New Day,” with Chris Cuomo, Kate Bolduan and Michaela Pereira.

You’ll find the post here, on our mobile sites and apps, and at the top of the CNN.comhomepage.

Here are the “5 Things to Know for Your New Day” for this Tuesday.

1. Obama’s alphabet soup of woes: Yesterday, the NSA. Today, the IRS. A new poll out this morning finds that a growing number of Americans think the tax men targeted tea parties because the White House told them to.

Our chief White House correspondent @BriKeilarCNN joins us at 6 on “New Day” to offer highlights from Obama’s interview with PBS’ Charlie Rose last night. At 7, Chief National Correspondent @JohnKingCNN brings us up to speed on the litany of issues the president’s facing. And at 8, we’ll have political contributors Stephanie Cutter and Kevin Madden offer their takes.

2. Afghanistan, it’s been real: After the longest and costliest war in U.S. history, our soldiers are handing over the reins. Starting today, the Afghans will be responsible for their own security. But are they ready? Not really.

Throughout the morning, international correspondent @SayahCNN will be live from Kabul. And over at CNN.com, we have an explainer on the challenges that await.

3. When is a choke not a choke? When celebrity chef Nigella Lawson’s husband says it’s a joke. Sure, the picture looks bad - he has his hand around her throat!! - but that was no grip, he says. “It was a playful tiff.” She’s moved out of the house and he’s apparently turned himself in.

4. Digging for answers: That’s what the FBI will be doing in the waist-high grass of a Detroit field again today -  looking for Jimmy Hoffa. Is this tip for real? Or will it be a dud like the others?
National correspondent @SusanCandiotti is live from Oakland around 7:15 to tell us about the tipster, a retired mob underboss with a simple motive:

“If they dig that body and find his remains, then I'm in a position to make a few dollars."

Meanwhile, tweeples are having a field day. (See what we just did there?)

There is no proof that Jimmy Hoffa DIDN'T get lost in your rock 'n' roll and drift away.

Just found Jimmy Hoffa; buried beneath the weight of all my failures.

5. It’s OK to scream “Poison” … if you’re Alice Cooper circa 1989.
It’s not OK if you’re on a plane, freaking people out.
National correspondent @Rene_MarshCNN joins us at 6 to break down what happened on a United flight yesterday. And at 7, Glenn Winn, who once worked as a security director at United, tells us what to do if we come across such a scene.

- A 9-cent fare hike = this?  Brazilians say the hike is just the straw that broke the camel’s back. They’re mad at the government for bigger reasons, and the protests (#protestobrasilia) are huge right now. We have a ton of iReports.

- Shark bites kid; shark gets a beat down: Our affiliate KPRC reports:

- Lil Wayne, big waves: The rapper walks all over the Stars & Stripes during a video shoot. And boy, does he rub people the wrong way.

- Florida nixes paid sick leave: Governor signs a law that says you can't force a company to offer them. The Internet is steamed.

- Jake Tapper, budding soap star? You may have a metal song named after you, Anderson, but let's see you cut it as an ac-TOR! Tapper will - as investigative reporter Spencer Phillips!

There you go.  All you need to know to get an early start to your morning.

One last thing: The reviews are in for our first day on air. (Hint: The show’s great.)