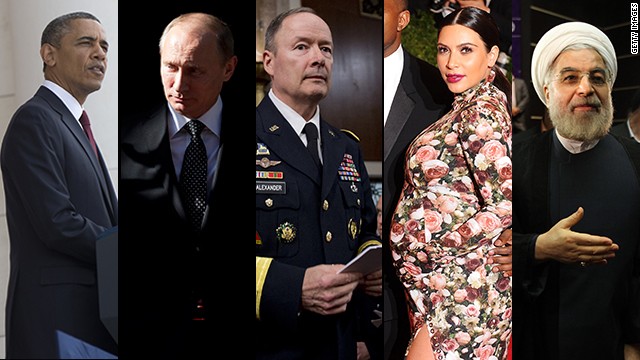 5 Things to Know for Your New Day

And it’s also the start of our new post: “5 Things to Know for Your New Day."

Every weekday morning around 6, you’ll find it here, on our mobile sites and apps, and at the top of the CNN.com homepage.

We’ll hit the top 5 stories of the day, clue you in on a few other buzzy items, and let you know about some of the must-watch stories coming up on the show.

1. You've lost that lovin' feeling: Our president seems to have developed a credibility problem. A new poll out this morning finds his approval rating at its lowest point in more than a year and a half – and half of you just don't find him honest and trustworthy.

Our Chief National Correspondent @JohnKingCNN tells us what’s behind the drop in the 6 and 7 o’clock hours of “New Day.”

2. This day in NSA leaks: If it’s a day ending in ‘y,’ it’s a day with a new NSA revelation. The latest? U.S. and British spooks spied on some world leaders during a G-20 summit four years ago. And when do we learn this? Right as world leaders gather for another meeting.

Chief White House Correspondent @YellinCNN, who’s traveling with Obama to the G8 Summit, is live at 6 and 7 with details about the summit. Chief Congressional Correspondent @DanaBashCNN immediately follows with the latest on the leaks. And House Majority leader Eric Cantor speaks to Kate Bolduan around 8a.

Over at CNN.com, @EdPayneCNN offers up a neat little summary of the reveals and reactions from the weekend

3. What's next for Syria:  “One should hardly back those who kill their enemies and eat their organs.” That’s Russia’s Putin firing back at the U.S. and others who want to arm Syria’s rebels. Russia, by the way, has been arming Syria’s regime for some time now. While the war of words continues, five thousand Syrians are dying every month.

Around 6:10 a.m., @FPleitgenCNN will be live from Damascus. He’s one of a handful of Western reporters who have been granted access into the country. He also has this dispatch from the war’s frontlines, an up-close look as bullets whiz by.

4. Iran’s Facebook status – It’s complicated: There’s a new sheriff in town but we don’t quite know what to make of him. On the one hand, Rouhani, who was elected Iran’s new president this weekend, is a reformist who’s talked smack about the state-run media and spoke in favor of the Green Movement. On the other, true power in Iran still rests with the Supreme Leader.

International correspondent @SayahCNN joins us around 6:10 a.m , and Chief International Correspondent @CAmanpour at 7:15 a.m. to make sense of it all. By the way, Christiane has a brilliant analysis on CNN.com this morning.

Meanwhile, there’s a more pressing matter that our @PiersMorgan points out:

Good news on shock election of moderate President in Iran. Now, can we all settle on one spelling of his name? #Rohani #Rouhani #Rowhani

5. It’s bad … but getting better in Colorado: Firefighters are finally getting a handle on the most destructive wildfire in the state’s history. But just because there’s no longer a big plume in the sky doesn’t mean Coloradans should think the worst is over.

National News Correspondent @GeorgeHowellCNN, who’s interviewed him, joins us at 6 and 7 to tell us what he meant.

Those are your five biggies for the day. Here are a few more stories that are brewing and have the Internet buzzing.

–         There's now one more Kardashian to keep up with: KimYe are parents. It’s a girl.  The Internet reacts with variations on this:

–         Carpenter or Nazi commander? Michael Karkoc is a 94-year-old Minnesota man. But did he hide his Nazi past for the last 70 years? CNN.com readers are weighing in on whether, after all these years, someone should still be tried. If you didn’t have a chance to read the story, tune in around 6:15 a.m. when correspondent @MiguelMarquez brings us up to speed.

–         Anderson Cooper, metal icon: If you missed this gentle ode to @AndersonCooper by Canadian metal band, Cryptic Murmurs, you really missed what the Silver Fox calls, “the musical equivalent of a warm bath.” With lines like “Stole his hair from the mane of a Pegasus” and “Usually has a stern look on his face/Stands in the middle of hurricanes,” we’re surprised it’s not the AC360 theme song yet.

There you go.  All you need to know to get an early start to your morning.