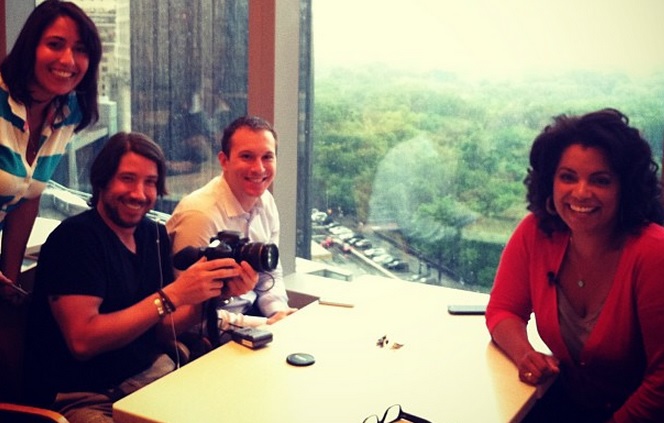 Michaela getting interviewed in the CNN Time Warner cafeteria
May 28th, 2013
09:50 AM ET

Michaela Pereira is the news anchor for CNN's morning show "New Day" – joining Chris Cuomo and Kate Bolduan – debuting on June 17. She joins CNN from KTLA where she was co-host of their morning show.

Michaela's nine-year run at KTLA was packed with incredible moments. KTLA compiled some of her best highlights along with interviews from other KTLA anchors on what they'll miss most about Michaela. Plus, Chris Cuomo surprised Micheala on air last week, with welcoming words (and even a little singing).

Find our more about Michaela below:

For nine years, Pereira was the co-host of “KTLA Morning News,” Los Angeles’ number one rated morning newscast. During this time, this program won nine Emmy Awards for “Best Regularly Scheduled Daily News” and one for KTLA’s live coverage of the Rose Parade. In addition, Pereira has been awarded with three Radio & TV News Association Golden Mike Awards: in 2006 for live coverage of a news story, “Urban Farm Eviction,” and the Best Daytime News Broadcast in both 2004 and 2006. She was also honored with two Mark Twain Awards in 2004: “Best Live Coverage of a News Event, Hostage Standoff Mexican Consulate,” and the “Best 60 Minute Broadcast: KTLA Morning News.”

Prior to KTLA, Pereira was named anchor of the technology news program “TechLive” on TechTV in San Francisco in 2001. In 1999, she was the guest host and internet correspondent of Buena Vista’s “Ebert & the Movies.” Before that, she hosted “Internet Tonight” on ZDTV. Pereira made her news television debut in 1993 on Canada’s CHEK-TV in Victoria, B.C. as a beat reporter and host of a magazine program.

Beyond her broadcasting achievements, Pereira is active in several community organizations working with at-risk children and teens. She served as a member of the board of directors for the Long Beach Boys and Girls Club; an advisory board member of Court Appointed Special Advocates (CASA), supporting children in foster care; and co-chair of the advisory board of Optimist Youth Home, providing services for troubled youth.

She’s been honored with numerous community awards including the Genii Award for Excellence in Broadcasting from Alliance for Women in Media, the Hollywood Community Leadership Award from The Hollywood Police Activities League and the Celebrity Philanthropist Award from Association of Fundraising Professionals.

Pereira is a member of the National Association of Black Journalists.

Pereira is based in New York City.